It’s clear that this “California product turned Texan” has found the right soundspace to fit his voice and guitar. Ethridge’s past tracks (available on Soundcloud) feature unexpected pop basslines and country-rock melodies, but “Drunk, High and Happy” straddles the line between California country (also known as stadium country) and acoustic indie folk. The eight spare, understated songs are inspired by personal topics from Ethridge’s life, infusing them with a beating heart that’s present throughout the album.

The first track of the album, “I Don’t Want To Go Back To Texas,” plays on George Strait’s classic, “All My Exes Live In Texas.” Ethridge reflects in poignant, but frank tones on what it would mean for him to give up his music career, leave his now-home of Nashville and return to Texas (and, yes, run into all his exes). The following track, “One Day They’ll Know My Songs,” is a touching ode to Ethridge’s younger sister, and also addresses the struggle of being heard in the notoriously competitive halls of Music City. Despite singing the line “Sometimes I want to quit, and throw away these dreams,” Ethridge’s determination to succeed is palpable on his debut album and it’s clear he’s not planning on going anywhere, anytime soon.

But it’s not all about the hustle—Ethridge is all about taking life one step at a time, and that’s exemplified in “Drunk, High and Happy” and “End of Forever.” “Drunk, High, and Happy” shares life lessons from the singer’s deceased grandfather, whose personality shines through in lyrics set over a simple acoustic guitar line: “Might have been too good at practicing just what I preach/ Because the straight and narrow don’t always set you free.” The love ballad on the album, “End of Forever” also emphasizes taking time to, as Waylon Jennings says, go back to the basics of love. The song’s narrator scrutinizes the small artifacts of a relationship, like old movie tickets and take-out napkins, ordinary objects that are described with happy wonder. A gentle guitar melody backgrounds the mutual comfort of two people who anticipate spending forever together. It’s a far cry from much of the music in Ethridge’s genre, in which blatant songs about “knockin’ boots” have become the norm.

It’s rare for an acoustic song to land high on the country charts, which these days are dominated by pop hybrids, but Ethridge’s soft, homemade sound and knack for storytelling shouldn’t be underestimated. The album is slim, a perfect opener that showcases the talent of the new kid on the block, without being overly showy. There’s plenty of room left for future sonic exploration, but Ethridge proves that he’s doing just fine in Nashvegas. 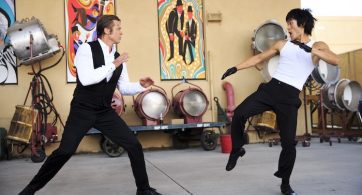 A small suburb of Madison, Wisconsin, is just about the last place one would expect to find a Korean American taekwondo expert. And yet, on a brisk spring morning, […]