Former model Shay Mitchell is more than just a pretty face on ABC Family’s new hit series Pretty Little Liars. In her early 20s, the Filipina- Scottish-Irish American actress plays Emily, a redhead Caucasian in the original books on which the series is based. “She doesn’t look anything like me,” says Mitchell. “I think it says a lot. The girl-next-door isn’t just blond-haired and blue-eyed anymore.”

The show, at press time the highest rated among female teens, follows four popular high school girls whose friendship is shattered when the former leader of their clique goes missing. Some compare it to the other popular teen show Gossip Girl, except that Liars “is more of a relatable show,” says Mitchell. “We’re not riding around in jets and carrying $10,000 purses.”

In fact, the show addresses some rather serious issues, like Emily grappling with her growing attraction to another girl. “What I love about this show is that it’s putting it out there, what she’s going through,” says Mitchell. “People need to see what’s going on and, hopefully, it will create dialogue for teens and their parents.”

And it’s not just the bisexuality that makes Liars edgy. Mitchell says that the casting call for the show was full of women of all ethnicities. (Asian Americans Janel Parrish and Nia Peeples also star in the show.) “I’m finding there are so many auditions that I can go to that I’m sure actresses before me couldn’t go to five, 10 years ago,” says Mitchell. “If I feel, looking as I do, that I can be a girl next door, I think that’s a really good thing for Asian American actors.” — Han Cho 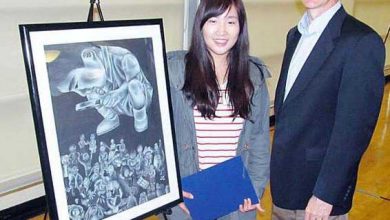