As 5 p.m. drew closer and closer this past Sunday, my Tumblr dashboard began filling up with red. High-resolution photos of glamorous celebrities posing in their designer gowns and tuxedos on the red carpet were already making their way to the Internet, and the Golden Globes hadn’t even started.

I eagerly browsed the #gg14 tag on Tumblr while simultaneously searching online for a link to stream the red carpet event and the awards show itself. As someone who has spent more money on movie tickets than she’d care to admit and had at one point considered declaring film and media studies as a major, awards season is for me what the Superbowl is for my tailgate party-attending football fanatic friends. For a few hours on those special Sunday nights — though I may be watching from a dimly lit computer screen and in pajama pants — I couldn’t be happier.

I indulged in red carpet hour as always and watched as the ever-so-chic Giuliana Rancic and Ryan Seacrest made their interview rounds. Bradley Cooper. Jennifer Lawrence. Julia Roberts. Bryan Cranston. They came by limo, paused for questions and were swept away for photos. So many familiar faces from my favorite TV shows and movies flashed on the screen, but there were plenty more faces I didn’t see.

I could count the number of Asian people I saw on one hand. Little Aubrey Anderson-Emmons from Modern Family pranced around and comedian-actor Aziz Ansari attended (he also was one of three actors who announced the Golden Globe nominees back in December), but otherwise the turnout was discouraging. Phil Yu, founder of the popular Angry Asian Man blog, tweeted “Playing “Asian Spotting” while watching the Golden Globes is like the most boring game ever.”

The lack of Asian American actors, directors and crew members in the entertainment industry is nothing new to us. Browse the list of big movies set to release in 2014 and you won’t see any Asian American actors credited until almost half of the year is over, in May, when Ken Watanabe’s name appears in the new Godzilla reboot.

But at least last year at the Golden Globes, we had some representation in the form of successful actors like Lucy Liu, who wowed viewers in her long side braid and iconic floral Carolina Herrera gown on the red carpet. At least last year, Life of Pi was nominated for multiple awards, including Ang Lee for Best Director of a Motion Picture.

No one of Asian descent was nominated in the Golden Globes this year — again, not a big surprise — but the fact that I didn’t see many Asian people in the red carpet coverage says a lot about who is represented in Hollywood and who is continued to be left out of it.

Granted, some Asian Americans were represented in the form of dazzling dresses and six-inch heels. Kerry Washington flaunted her baby bump in a creamy Balenciaga number designed by Alexander Wang, and Jimmy Choo was a popular choice for pumps (Sandra Bullock) and clutches (Taylor Swift). But future awards shows better start recognizing the Rinko Kikuchis and Ken Watanabes out there — I’m not sure how much longer I can stand having Hollywood equate “Asian American” with only designer bags and shoes. 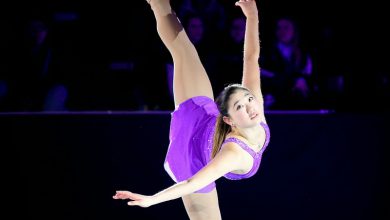 Nagasu decision not in line with those made for mens, pairs teams Story by Olivia Ouyang. You have probably heard by now that Mirai Nagasu, the bronze medalist at the […]