As the first major awards ceremony of the fall season, the Gotham Awards is one of the leading honors for independent film and television that provides early recognition for chosen nominees and recipients. This year, the 32nd Annual Gotham Awards will highlight a spectacular array of AAPI stories and performances.

Starting with the nominations for Best Feature, it’s a no-brainer that A24’s “Everything Everywhere All At Once” landed on the list. Directed by Daniels Kwan and Scheinert, the indie box-office wonder follows the story of laundromat owner Evelyn Wang (Michelle Yeoh), an unlikely hero who must channel her newfound powers throughout the multiverse as the fate of everyone she loves hangs in the balance. Yeoh is also up for Gotham’s Outstanding Lead Performance Award for portraying Evelyn.

On the list for Best Documentary Feature comes “All That Breathes,” directed by Shaunak Sen.

The five nominees for Best Screenplay include “After Yang,” written by South-Korean filmmaker, Kogonoada. The sci-fi drama is centered on a man named Jake who, upon the malfunction of his daughter’s beloved android Yang (Justin H. Min), realizes he’s been disconnected from the lives of his wife and daughter.

For Breakthrough Television over 40 minutes, nominees include “Pachinko” (Apple TV+), “Station Eleven” (HBO Max) and “This Is Going To Hurt” (AMC+). Based on the New York Times bestselling novel of the same name, “Pachinko” chronicles the hopes and dreams of a Korean immigrant family across four generations as they leave their homeland in a quest for survival. “Station Eleven” follows the survivors of a devastating global pandemic who must rebuild their world anew. The series follows Kirsten Raymonde (Mackenzie Davis) and Jeevan Chaudhary, played by British-Indian actor Himesh Patel. “This Is Going To Hurt,” meanwhile, chronicles the life of  junior doctor Adam Kay (Ben Whishaw) and his chaotic career in obstetrics and gynecology, and also stars British-Indian actress Ambika Mod as Shruti Acharya.

For Outstanding Supporting Performance, Ke Huy Quan has been nominated for his role as Evelyn’s husband Waywond Wang in “Everything Everywhere All at Once,” along with Hong Chau as Liz in “The Whale.” Based on a play of the same name, “The Whale” follows a reclusive English teacher with severe obesity who attempts to reconnect with his estranged teenage daughter.

The breakout nominees for Outstanding Performance in a New Series are Bilal Baig from “Sort Of” (HBO Max), Minha Kim from “Pachinko” (Apple +) and Pien from “As We See It” (Amazon Prime). “Sort Of” follows Sabi Mehboob (played by Baig), a non-binary, Pakistani-Canadian millennial who feels forced to juggle their various labels and identities.

In the Best International Feature category, the Korean crime-drama “Decision to Leave” is a title not to miss. Written and directed by Park Chan-Wook, the film follows a detective who, while investigating a man’s death, ends up meeting and falling for the dead man’s mysterious wife.

And last but not least, announced this morning were the People’s Choice Awards nominations.

Coming in at #1 for Best Comedy Movie of 2022 is “Fire Island,” directed by Andrew Ahn and written by Joel Kim Booster. The Hulu original follows a group of queer best friends in a modern gay spin of “Pride and Prejudice” as they gather in the Fire Island Pines for an annual trip of hedonistic partying and lovemaking. But when a sudden change of events jeopardizes their week in paradise, long-standing friendships are put to the test while our heroes navigate the complex world of queer love and identity, providing audiences an unprecedented glimpse into the experiences of people of color fighting for acceptance in predominantly white, queer spaces.

Gunning for Best Action Movie of 2022 is “Black Adam,” starring biracial Samoan actor Dwayne Johnson in the titular role. The film follows a superhero bestowed with almighty powers from the Egyptian gods. Another superhero film nominee in the mix is Marvel’s Thor: Love and Thunder directed by Polynesian filmmaker Taika Waititi. The story follows Thor, the Norse god of thunder who enlists the help of Valkyrie, Korg and his ex-girlfriend Jane to bring down an enemy (Gorr the God Butcher) that intends to make the gods go extinct.
Read the full lists of nominees here and here! 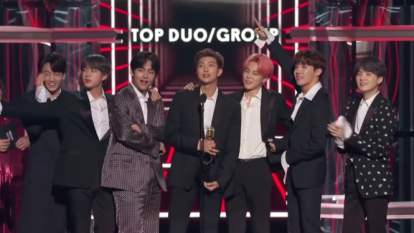 Another day, another slay for the K-pop genre. K-pop is once again making headlines in the U.S., establishing its presence as an undeniable influence in American pop culture. Billboard […]