Our fourth nomination is Viet Pham:

Sh*t just got real, folks. Of course we all admire these show business men with the camera-friendly muscles, but we all know the surefire way into anyone’s heart is through his or her stomach, and Viet Pham IS THE GUY WHO BEAT BOBBY FLAY IN IRON CHEF AMERICA. A recent contestant on Next Food Network Star, he co-founded Forage Restaurant in Salt Lake City, has been named Food & Wine’s Best New Chef and is a 3-time semifinalist for Best Chef award from the James Beard Foundation. And check out that winning smile. His new venture is a new restaurant called ember + ash. 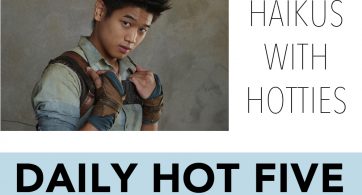 We’re collecting votes until Tuesday, August 25 at 11:59PM PST to see who we should pursue for our 2016 Haikus with Hotties calendar, and we’re giving you Daily […]