The famous duo that made west-coasters wonder about White Castle’s magical taste is back again for the third time–except Harold and Kumar are no longer searching for the closest White Castle or escaping from Guantanemo Bay–they’re searching through New York City to find a replacement Christmas tree…for Harold’s father-in-law that Kumar accidentally burns down.

The movie, which will be shot in 3D, picks up six years after Guantenemo Bay. The former best friends for life are existing in two different worlds until Kumar shows up at Harold’s with a “mysterious package,” which leads to a turn of events that ends up with a burned Christmas tree and a crazy adventure that rekindles of the heroes’ friendship.

According to a press release from Mandate Pictures and New Line Cinema,

“The new “Harold & Kumar” comedy picks up six years after the duo’s last adventure. After years of growing apart, Harold Lee (John Cho) and Kumar Patel (Kal Penn) have replaced each other with new best friends and are preparing for their respective Christmas celebrations. But when a mysterious package arrives at Kumar’s door, his attempt to deliver it to Harold’s house ends with him inadvertently burning down Harold’s father-in-law’s prize Christmas tree. With his in-laws out of the house for less than a day, Harold decides to cover his tracks rather than come clean, and reluctantly embarks on another ill-advised but hilarious journey with Kumar, taking them through New York City on Christmas Eve in search of the perfect Christmas tree.

It would not be a “Harold & Kumar” film without Neil Patrick Harris, who reunites with Cho and Penn in the cast. Returning “Harold & Kumar” cast members also include Paula Garcés (TV’s “The Shield”) as Maria; Danneel Harris (TV’s “One Tree Hill”) as Vanessa; Bobby Lee (“Pineapple Express”) as Kenneth Park; and Eddie Kaye Thomas (“American Pie,” HBO’s “How to Make It in America”) as Rosenberg.”

Even Bobby Lee will be returning as Kenneth Park. Do you think Harold and Kumar part three will become another cult classic? 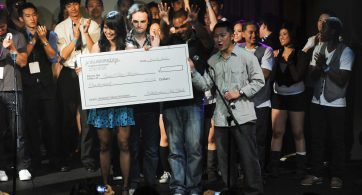 Paul “PK” Kim, 33, the comedian and founder of Kollaboration, a multi-city Asian American talent showcase, is finally calling it quits after almost a decade of producing the annual […]