The anti-affirmative action movement continues – Harvard University must release records showing six cycles worth of admission data as evidence in a lawsuit that accuses them of discriminating against Asian American undergraduate applicants.

“Harvard’s undergraduate admissions policies and procedures have injured and continue to injure [Asian American students] by intentionally and improperly discriminating against them on the basis of their race and ethnicity in violation of Title VI [of the Civil Rights Act of 1964],” the complaint in the lawsuit reads.

Students for Fair Admissions, a nonprofit anti-affirmative group that filed the lawsuit in November 2014, won a minor victory on Sept. 6 when U.S. District Judge Allison Burroughs ordered Harvard to release “comprehensive data from its admissions database.”

However, the university filed a request to deny this action because it believes releasing information on over 200,000 applicants infringes the privacy rights of students, according to Revelist. Additionally, the school argued releasing that amount of information was unnecessary given the amount of data Harvard already makes public.

According to the Harvard Crimson, the student group decided to sue Harvard after Edward Blum, the head of the Project on Fair Representation, launched a plethora of websites in 2014 with anti-affirmative action themes. The Harvard Not Fair site asks, “Were you denied admission to Harvard? It may be because you’re the wrong race.”

Blum was the force behind Abigail Fisher’s anti-affirmative action case against the University of Texas, in which Fisher, who is white, alleged she was denied admission due to her race. The Supreme Court ruled in favor of the practice 4-3 in June, and said the university’s admissions program was lawful under the Equal Protection Clause.

Meanwhile, Asian American groups in support of the policy – “holistic” affirmative action that they say does not constitute quotas or discrimination – have argued that it helps oft-ignored segments of the AAPI population that suffer from low education attainment levels – in particular South Asian Americans – and helps ensure diversity.

“Considerable deference is owed to a university in defining those intangible characteristics, like student body diversity, that are central to its identity and educational mission,” Justice Anthony Kennedy wrote in the majority opinion. 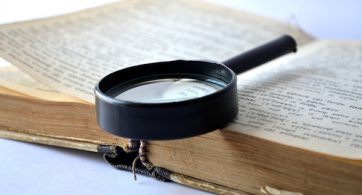 Can we read the text inside a closed book? Researchers from the Massachusetts Institute of Technology say yes, we can – recent technology has proven able to identify letters on the […]