Sometimes, we all need those days where we can just marathon a whole string of Studio Ghibli films to soothe our souls and take a break from school- or work-related stress—and luckily, a Ghibli marathon at home will soon become a reality.

Today, reps for HBO Max announced they have acquired the U.S. streaming rights to Studio Ghibli films, and will be making the entire Studio Ghibli film library available on their streaming service in the spring of 2020—except for “The Wind Rises,” which will be available in the fall of 2020. This is the animation house’s first-ever deal to have their films licensed to a streaming service.

“We are excited to be working with HBO Max to bring the complete collection of Studio Ghibli films to streaming audiences in the US,” said Koji Hoshino, Chairman of Studio Ghibli, in a press release. “Upon launch of the service this spring, existing Ghibli fans will be able to enjoy their favorites and delve deeper into the library, while whole new audiences will be able to discover our films for the first time.”

The entire catalog of Studio Ghibli films that will available to stream include: “Castle in the Sky,” “The Cat Returns,” “From Up On Poppy Hill,” “Howl’s Moving Castle,” “Kiki’s Delivery Service,” “My Neighbor Totoro,” “My Neighbors the Yamadas,” “Nausicaä of the Valley of the Wind,” “Ocean Waves,” “Only Yesterday,” “Pom Poko,” “Ponyo,” “Porco Rosso,” “Princess Mononoke,” “The Secret World of Arrietty,” “Spirited Away,” “The Tale of The Princess Kaguya,” “Tales From Earthsea,” “When Marnie Was There,” “Whisper of the Heart” and “The Wind Rises.”

Studio Ghibli is one of the world’s most famous and revered animation studios, with acclaimed visionaries such as Hayao Miyazaki, Isao Takahata and producer Toshio Suzuki as its founders. Many of the studio’s films have won international awards, including an Academy Award®for Best Animated Feature for Spirited Away. GKIDS handles the North American distribution for the studio. 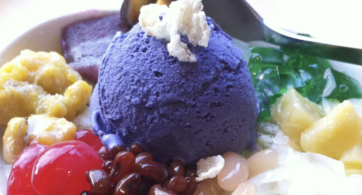 Happy National Dessert Day! Even though we all love chocolate cake and donuts, there’s only so much you can eat before your taste buds are hankering for a change. […]