After a traditional Chinese lion dance performance (in partnership with Bloomingdale’s) drummed throughout the open-air Westfield Century City, shy guests eased into the Lunar New Year spirit under the endless sky of the Atrium. The Jan. 25 Lunar New Year concert, part of the extravagant shopping center’s Live at the Atrium Series, livened up crowds of onlookers, shoppers, dancers and music lovers, drawn in by curiosity, complimentary soft drinks and the red and gold decor.

In between hilarious skits by emcee Joon Lee, audiences double dabbed along with TFTI Dance Group as the latter flossed their way to the stage. Their show got families up and moving, and their clapping echoed between Tesla and lululemon while strollers twirled around to the rhythm.

The energy from their performances lit up the stage for singer-songwriter Justin Park to showcase songs from his latest album, “Places Like Home.” Park has toured with international superstars like Amber Liu, and his performance was a huge hit with the all-ages crowd.

Breakout R&B artist Joyce Wrice headlined the event in a white polka-dot dress which shone against the red curtain backdrop. The staff helping work the event and the performers all did a beautiful job kicking off the Year of the Rat.

To learn more about Century City’s “Live at the Atrium” series, check out their website here. 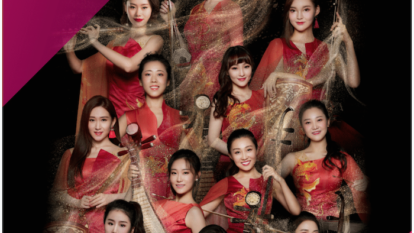 Ready for the next biggest wombo combo of musical innovation?  Looking for the best of both worlds in Chinese and Western music?  This all-female Chinese musical group has got […]