In the newly released trailer for the upcoming summer action flick “Skyscraper,” we watch as Dwayne Johnson leaps off a tower crane toward a burning skyscraper taller than the Burj Khalifa.

In it, Johnson plays a former FBI agent with a prosthetic leg who works in security. On assignment in China, he’s framed for a fire that engulfs the world’s tallest building, and finds himself racing against time to save his trapped family, and to clear his name.

Johnson is one of Hollywood’s busiest leading men. His latest blockbuster, “Jumanji: Welcome to the Jungle,” is leading the box office and has so far grossed $855 million worldwide. In April, he’ll see “Rampage,” a science fiction monster action extravaganza, hit theaters. He’s also set for his own reality competition show, “The Titan Games,” on NBC.

“Skyscraper” is set to release July 13. 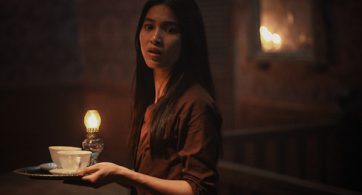 The Vietnamese gothic horror film “The Housemaid” is up for an English remake, with the Oscar-winning screenwriter behind “Precious,” Geoffrey Fletcher, attached to write. Directed by Vietnamese American filmmaker Derek […]