Before anyone knew that Simu Liu would be playing Marvel’s first Asian superhero, Shang-Chi, Liu starred in various short films and sketches as a “Yappie,” a contestant in an Asian Bachelorette spoof and most recently, Instagram boyfriend. Apart from the sitcom “Kim’s Convenience,” YouTube channel Wong Fu Productions has featured Liu in multiple projects, allowing us lucky viewers to explore a different side of his acting career.

Liu teaches a masterclass in the art of snapping the perfect shot for your significant other’s Instagram. The many do’s and don’ts are simply put: remember the three frame minimum, and never cut off the feet in a full body shot. Say it with him, “The shoes are part of the outfit!”

As a contestant on the Asian Bachelorette, Liu is Ben, one of many hopeful Asian suitors looking for love. Will he make it to the hometown dates or better yet, the proposal? Tune into the MOST dramatic season in the history of the show to find out.

Nope, not a yuppie or a yippie. Let’s break it down. This layered web series questions the safe, predictable bubble of the young Asian professional. Liu plays one of the Yappie college buddies, while Andrew (Phil Wang) learns there’s more to life than the comfort and stability of his chosen path.

This quick three-minute sketch is about a blind date gone wrong, produced by CBC Comedy. An uber cringe-worthy situation, but one that is equally entertaining to watch. Liu is the “hot guy” opporsite the “awkward girl” in this scenario.

Is anyone cutting onions around here? You’ll probably shed at least a few tears while watching this short film, co-written by Liu himself. Without spoiling anything, Liu plays the loving father to Zoey, a sweet 6-year-old who is only able to see her mother once a year. 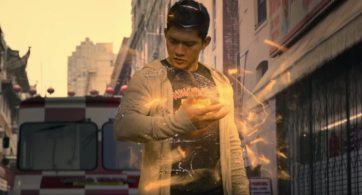 A brand new, power-packed martial arts series hits Netflix next month.  Details about “Wu Assassins” was kept tightly under wraps during production and editing process, but now audiences can […]