There is a famous saying that goes something like this: “Keep on keeping on.” If anyone embodies that spirit, it is the honorees of Kore Asian Media’s 16th Unforgettable Gala, who distinguished themselves in fields in which the path can often be lonely and not always easy.

Presented by BMW, Unforgettable gala recognized those who took a chance, worked hard, and followed their dreams. Now they stand igniting sparks for change. Here’s what they had to say:

Chung kickstarted his speech with a search for Jason Scott Lee, the star of “Dragon: The Bruce Lee Story.” Chung, who joked that as a young man he used to put on the film to set up the bedroom mood during his dates, addressed his frustration with growing up with a lack of strong, Asian male representation on screen, especially “a strong Asian male having sex on screen” like the one depicted by Lee in “Dragon.”

“I’m from L.A., and this is really what we stand for, and the value of everyone here who is all about seeing ourselves represented on the big screen and understanding self-reflection,” Chung said. “It’s about changing the status quo and seeing ourselves as we should as Asian Americans.”

Chon, the creator, writer and actor of the Sundance Award-winning indie film “Gook,” and soon due be seen in the new ABC series “Deception,” sent a video message from New York. “I’m still developing as an artist and I feel like I have a new purpose in life, which is to advance Asian voices in a very humanistic way,” he said. “‘Gook’ was a work of love of for me, so we can break through the threshold in mainstream media. So thank you for the award. I truly appreciate it.”

Bold, sassy and outspoken, the Female Breakout recipient gave a speech true to herself. Like Chung, Awkwafina spoke about a lack of representation in media and personal idols growing up. “I never saw girls like me. When you don’t see girls like you, it makes your dreams seem impossible,” Awkwafina said. She was working at a vegan bodega when “My Vag” went viral, which she believes happened for two reasons: “First, because no one has ever seen anything like me. That’s why it clicked,” she said. “And second, is because Asian American women had never seen anyone like them.”

“Progress isn’t sprinkling in Asian people to create the illusion of diversity. Progress is giving us the ability to tell our own stories,” she said. “Asian people need to be seen, but they also need to be seen as authentically as themselves. I have the voice of a pro wrestler and the body of a pikachu, and I stand before you as a message that dreams do come true.”

“Who I was and who I felt I was wasn’t represented in the world around me, especially in entertainment,” Butler said, about growing up feeling like he had no place to belong. “I didn’t have a guide to follow. I didn’t have a path. I didn’t have a role model that looked like me, who acted like me, or shared my struggles.”

He thanked the pioneers who came before him. “Fast-forward 10 years, I’m in this room speaking to a bunch of intellectuals, strong, beautiful Asian Americans who are artists and creatives, or maybe not even in the industry at all,” he said. “I’m willing to bet that most of you, especially after hearing all of your speeches tonight, you guys were in the exact same situation of feeling like you did not belong and wished there was a community out there that would support you, or even existed. Thank you everybody in this community for being role models, for being examples for the next generation, so maybe they can feel a little less lonely.”

Athlete of the Year – Chloe Kim

Chloe Kim, who received the Athlete of the Year award, left a video message for the 16th Unforgettable Gala. (Kore Asian Media)

In a video message, the 17-year-old Kim shared some sage career advice: “I encourage you guys to keep having fun and loving what you do,” Kim said. Ranked No. 1 halfpipe in the world, Olympics expectations are high for Kim. “I feel like that’s been a huge part of my career.”

It was the kindness of a professor that gave Dr. Mike Hong, community leader and entrepreneur, the chance to enroll in UCLA as a struggling student while working as a houseboy in Beverly Hills. “An English professor gave me $200 without any strings attached,” Dr. Hong reflected. “With that help, I was able to register and graduate. I promised then to study hard, to work hard, and someday help other people.”

“People always ask me the same question.” Dr. Hong mused. “‘Dr. Hong, what is the secret to your success?’ The answer is quite simple: Just do your best. Pay attention to the details. Strive for excellence in each and everything you do, no matter how small the task. Every time you succeed, you are representing the Asian American community. Do not dwell on negative thoughts. Your positive thoughts are self-fulfilling prophecies. Do not be afraid of your success.”

In her speech, Grace Park addressed the current — and pivotal — social moment. “In this current culture of ‘snap or didn’t happen,’ it’s clear that humans, being social creatures, want to be relevant and reflected in society. We want to know: Do we matter?” she said. “In this time of social change when diversity is being asked for, even demanded, where women’s voices are being heard in Hollywood, in tech, to politics, we’re ever so grateful to witness this changing of the guard. It’s beyond race and gender, religion, race, class — it’s about humans flourishing.”

Daniel Dae Kim shared powerful words on not just being included, but on leading.

“Many of you know me, this year especially, as a voice of inclusion,” Kim said. “It’s safe to say it’s part of the reason I’m here tonight. Inclusion, diversity are all very popular buzzwords and extremely important. But what I challenge everyone in this room to do is move beyond the notions of being included — to lead. Let’s not simply fight for inclusion, let’s set our bar higher.”

“If you’re a leader, you never have to beg for a place at the table because you’re the one hosting the dinner,” Kim continued. “What’s very evident tonight is that we are capable, we are ready.”

Actress of the Year – Maggie Q

Q, who’s acted both in Asia and in the U.S., knows a thing or two about fitting in, and the challenges that come with it. “I think finding your place in the industry is difficult no matter who you are or what race you are,” Q said, after sharing a story of being sent a script for a role titled “A Chink.” “It’s a vapid industry that sucks the life out of you. It’s difficult as it is, and then to be on top of that, a minority and a woman, has been a challenge.”

Actor of the Year – Leonardo Nam

Nam closed the event with a rallying note. “Our strength comes from connecting with other brother and sisters out there in the industry who sees past the way the industry made us pit ourselves against one another,” he said. “We’re told there’s only room for one Asian role, or one open ethnicity, only room for only one token voice on the department, the board, the team, or behind the camera. This event proves that theory wrong because all of you here have been pioneers in your own workspace, in your schools in your community. I’m only here because you have all refused to accept these limitations.” 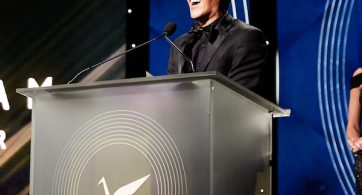