In the wee hours of the morning on Sunday, July 14, crowds of Supreme-clad shoppers lined up at the Rose Bowl Flea Market to score sold-out designs from the streetwear clothier RHUDE. Founded by Manila-born designer Rhuigi Villasenor in 2015, the brand is as popular with the 20-something hypebeast crowd as it is with a group of A-list clientele that includes Michael B. Jordan, Justin Bieber and Ellen DeGeneres.

In addition to the archival pieces, the sale included a limited sneak peek of Villasenor’s latest collab with shoe brand Vans. As the temperatures rose, so did the anticipation—and the number of people in line.

Eager shoppers lined up as early as 5 a.m. to grab sold-out RHUDE designs and catch a glimpse of the new Vans collab. Many customers proudly sported RHUDE and other streetwear brands.

RHUDE staffers discuss a game plan before allowing shoppers to browse the merchandise.

Apparel on offer included sold-out items like the RHUDE Google logo tee and the Died For You 2 skeleton print.

Despite the California heat that was already formidable by 7 a.m., plenty of hoodies and button-ups were also available.

A pair of multi-colored bandana print Vans, fresh out the box.

A shopper inspects a pair of black-and-white bandana print Vans.

Besides the limited preview of the Vans shoe, shoppers snagged older styles of the comfy and popular traxedo pants. 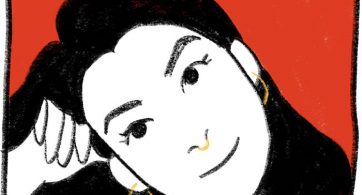 In the primordial grime and goop of Instagram—a social media platform better known for cultivating bodacious “IG baddie” personalities—emerges a new kind of comic artist. At the forefront of […]