At the premiere of the Netflix rom-com “Always Be My Maybe,” actor Jake Choi is so excited that he can barely contain himself. Before the movie starts rolling, Choi chats it up with “Angry Asian Man” blogger Phil Yu and Philip Wang of Wong Fu Productions. As the lights dim, Choi giggles before the title screen appears. As scenes of romantic awkwardness play out between comedian Ali Wong and “Fresh Off the Boat” star Randall Park, Choi laughs loudly and shouts, “Yeah, that’s my man, Randall!”

Choi has recently started to hear some shout-outs and love coming toward him, due to his performance as Charles Bae, the hardheaded brother of the romantic protagonist, Daniel Bae (played by Charles Melton), in “The Sun Is Also a Star.” He also has a recurring role on ABC’s “Single Parents,” as baby daddy Miggy Park. His gregariousness at the premiere of “Always Be My Maybe” isn’t just pent-up anticipation. Choi is a card-carrying member of L.A.’s tight-knit, Asian American acting community. At the time of this interview, Choi is in the middle of a lunch with friends to celebrate the fact that his pal, Paul Yen, just got cast in the upcoming Reese Witherspoon-produced miniseries “Little Fires Everywhere.” But other than multitasking, he says that he’s “just been chillin’ like a villain on penicillin.”

His mellow, laid-back approach to life is not unlike his foray into acting. There were no years of aspirations and dreams; he moved to L.A. because he couldn’t stand to spend another winter in his hometown of New York City. “In 2016, I came out here to visit, and then I ended up staying,” says Choi, who’s now shacked up in East Hollywood. “I don’t like the cold, so the weather really made me stay. There’s a sense of community in Thai Town. A lot of people in the industry live here. It’s not slow. I love Thai food, so I can’t complain.”

Before he began acting, Choi dreamed of being on the court—the hardwood court. For college, Choi moved to South Korea to study physical education and play ball for Yonsei University in Seoul, which he describes as “the Duke University of Korea.” “I played at the university level, which is the same as the pro-level there,” Choi says with pride in his voice.

But he eventually lost steam for basketball. Part of the reason he says he stopped was because there were so few athletes that looked like him playing professionally in the U.S. “It was hard because there was a part of me that always doubted myself, and I think that was why,” Choi says. “When you don’t see yourself or someone like you doing it, everything feels impossible. That doubt was always in my head as a kid, even though I didn’t know it consciously. And I think that’s why there’s such a big need for true diversity and inclusion in media. Because without precedents, everything feels impossible.”

Don’t mistake the wistfulness for regret, though. While in South Korea, a friend suggested that he take an acting class. Choi immediately took to the craft. After his return to the States, he began booking small roles on shows like “Hawaii Five-O” and “Law & Order: Special Victims Unit.” Now he feels lucky to be as busy as he is, and calls it a “great honor” to act. “[Acting] is important as a job and as an art form because it gives voice to the people who are voiceless,” Choi says. “It tells stories and reflects the time that we are in. It’s important to keep the story going, and to cultivate art and artists so that other people in the world who don’t have the privilege of being an actor or an artist don’t feel invisible.”

Choi is also fighting invisibility on other fronts. He’s been making waves in the LGBTQ community for being outspoken about his sexuality. He doesn’t like labels, but says if he had to pick, he would identify as sexually fluid or pansexual. “There’s stigma and shame around sexuality still, especially within the Asian and Asian American communities,” Choi says. “If I’m more open and candid about it without feeling like I’m ashamed, then it’ll start more conversations and will help break down stigmas. If we can just normalize everything that’s not straight, that would be nice.”

For a minute, Choi’s vibrant personality grows quiet. The silence is filled with the sounds of clinking glasses and silverware as he ruminates on the importance of representation. “We rarely see Asian characters like that on TV and film, even though they exist in real life,” Choi says. “When you don’t reflect that in media, it’s easy to feel not as important. Or we don’t feel a sense of worth. It really does shake your self-perception, and how you navigate through the world.” 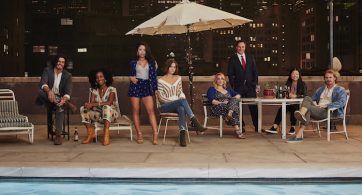 Winding down in front of the tube after a long day, with an alcoholic beverage, a favorite fuzzy bathrobe and a TV show that doesn’t demand too much of […]