Winding down in front of the tube after a long day, with an alcoholic beverage, a favorite fuzzy bathrobe and a TV show that doesn’t demand too much of the intellect, is a proud American tradition. The second season of “Good Trouble” is helping to carry on the torch, but with a bit of a twist.

“Good Trouble” is a spinoff of the Freeform show “The Fosters,” a family drama that follows a multiethnic clan comprised of two mothers and their biological and adopted children. Like its predecessor, “Good Trouble” has garnered its own fervent fanbase, as it shows two of the Adams Foster sisters adapting to their new lives in a communal Los Angeles apartment complex, the Coterie. Callie, the eldest daughter of the family, works as a legal clerk for a conservative judge in the hopes that she can sway him to take a more progressive stance on a police brutality case. Mariana, on the other hand, works at a male-dominated tech company where she’s developing her own app and is striving to close the industry’s glaring pay gap. The second season of the series made its debut on June 18.

This season delivers more of the same juicy gossip that made the first such a hit. The show feels like one part “Friends,” one part courtroom drama and one part “Silicon Valley,” but its narrative structure is told through the usual TV drama format. Scene cuts are sudden as viewers are jerked between various sequences. Fans can find themselves in the midst of a steamy tryst between Mariana and her underling Raj, and then launched into the midst of a trial of a policeman being tried for the shooting of an unarmed black teenager. The cuts can feel jarring, but it’s a powerful way to keep viewers engaged, as bits of juicy gossip are strung along in tantalizing pieces. Just how is Callie going to get out of that love triangle between her bisexual artist lover and her lawyer boyfriend?

A standout among the “Good Trouble” cast is Sherry Cola, a comedian with a firecracker personality. On this show, however, she plays Alice Kwan, a timid, unsure-of-herself lesbian who recently came out to her parents. But you can’t keep that inner Cola spark down for long, though. During her character’s dramatized inner monologues, Cola delivers hilarious performances reminiscent of one of her earlier stage personalities, Lil’ Tasty, as she muses on the pressures of coming out and how to introduce her non-binary partner to her parents. How do you introduce “them” when you’re already so worried about introducing “her?”

And don’t forget about Ken Kirby’s performance as Callie’s work rival Benjamin, who came off as an overly ambitious and, to be honest, pretentious office mate. Season two finally gives viewers a glimpse (albeit a tiny one) into Ben’s backstory and why he’s been such a major jerk to Callie. He’s just trying to hustle for his family. Raised by a father who worked as a janitor at Harvard so that his son could one day attend and a mother who helped support the family with her job as a waitress, he’s saddled with a huge load of parental guilt—a very Asian emotion, dare we say. One of the most disagreeable characters of the show, Ben finally gets some character depth.

Despite its seemingly vapid content and gossipy characters, “Good Trouble” is unlike its TV drama predecessors. It’s radical. In addition to Callie and Mariana’s cavalier work in their respective industries, the show addresses other current issues like mental health, body positivity, bisexuality and the horrors of workplace sexual harassment with an empathetic eye through the lives of its characters. “Good Trouble” is part of a new generation of TV, one that hopes to accurately portray modern, American life with all of its new terra incognita. 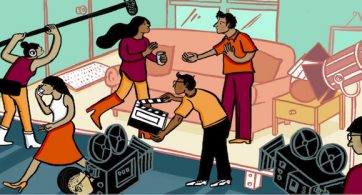