Wearing a simple black T-shirt and a tuxedo jacket, Simu Liu looked right at home at a dinner party to honor Sandra Oh at an upscale Beverly Hills restaurant earlier this spring. He shook hands with fellow Canadian actors like Manny Jacinto and rubbed elbows with some of the biggest Asian American stars working today. John Cho, Sandra Oh and Daniel Dae Kim were all present, and though Liu is one of the youngest, freshest faces on the scene, he didn’t look out of place among his Asian American role models.

“It was literally just a room full of all of my heroes that I had seen growing up from childhood,” he gushes a few weeks later over the phone. “They all had one thing to say, which was: ‘Now is the time for us to stand together.’ Together, our voices amplified are stronger than ever before, and it’s no longer a thing to be made to feel ashamed of—being Asian. Now is the time to be proud of who we are, and to be unapologetic about what we want, so that we can create a space for us that is new and different and uniquely our own.”

It’s a bright and sunny San Francisco afternoon, but Liu is stuck indoors, stretched out on the couch, chatting on the phone and taking a much-needed writing break at Andrew Chau’s condo. Chau is an entrepreneur and the co-owner of Boba Guys, and Liu fondly cites him as a mentor.

“I very much feel like [entrepreneurship] is a part of my DNA, as much as the artist part of me,” says Liu, who was just finishing up some tweaks for a screenplay he’s working on with his Daytime Emmy-nominated writing partner, Nathalie Younglai. The only thing he’s allowed to say is that it’s a rom-com, and he’s the star.

“It’s kind of like an awesome product that will translate all over the world,” he says. “And specifically, I’m very proud to say that we wrote the male lead and the female lead both for Asian Americans and Asian Canadians. We just got word from the other person who is attaching herself, but we’re not going to reveal it yet. But it’s big. We’re very excited.”

Liu has a reputation for being a champion of Asian representation on screen. He’s outspoken on social media about taking roles that defy stereotypical depictions of Asian men as weak, emasculated and subordinate. His most well-known role as Jung in the hit Canadian show “Kim’s Convenience” is the epitome of a complex, well-written Asian male character. Jung is the handsome, but estranged son of a Korean Canadian family that runs a grocery store, and each episode shows his journey from navigating love in the workplace to reconnecting with his father.

With its lighthearted humor and its unique portrayal of relatable immigrant family experiences, “Kim’s Convenience” is one of the highest rated shows in Canada. Its third season was just released on Netflix in the U.S. in April, and with the show’s ability to reach a wider audience across borders, Liu’s popularity in the states is growing. He recently guest-starred in the 100th episode of ABC’s “Fresh Off the Boat” and just finished shooting the film “Women Is Losers” in San Francisco.

Constantly flying between the U.S. and Canada as a successful actor is something Liu could only dream of in his younger years. But it takes its toll. “I’m tired,” he admits, laughing. Despite his busy schedule, Liu opens up about his life experiences and how he got here.

Born in Harbin, China, Liu moved to Kingston, Ontario, when he was 5 years old. Before then, he was raised by his grandparents while his parents were completing their master’s and doctoral programs in Canada. Liu recalls how surreal and confusing it felt to meet his parents for the first time, when his father picked him up in China and his mother met the two at the arrivals terminal in Toronto Pearson Airport.

“You feel like it’s a happy ending because, finally, the mother, father and son are together, but inevitably, you run into this sort of distance and unfamiliarity,” he says before pausing. “And growing up, it was very difficult for us. We found ourselves arguing a lot. My parents hadn’t seen me develop over the years, and they were kind of questioning, ‘Why is he that way? Why doesn’t he like this? Why doesn’t he like that?’”

Like many children of Asian immigrants, Liu spent his younger years trying to chase his parents’ approval, but always found himself falling short. As a last-ditch effort to please them, he majored in business at the University of Western Ontario and eventually became an accountant at Deloitte, one of Canada’s top accounting firms. His family approved of his career choices, but it became unbearable for Liu to keep fulfilling their expectations. “I lasted less than a year. I was miserable at this job, just as I was miserable as a student, and really didn’t feel like I was living the most purposeful version of my life at all,” Liu says.

It wasn’t until he got laid off that, on a whim, he responded to an advertisement on Craigslist looking for extras for Guillermo Del Toro’s “Pacific Rim.” He recalls how everyone on the crew was alive with purpose and happy to be on set. For Liu, it was an intoxicating feeling.

“At no point was I like, ‘Oh, I’m laid off from my job. I am now going to pursue acting,’” Liu says. “It was just meant to be something to pass the time—just to feed my soul before I got back into the workforce. … It was something I’d say was a happy accident.”

Liu’s untraditional journey of finding his purpose motivates him to help others find theirs. His social media posts encourage his followers to “find your greatness,” “step into your spotlight” and “bet on yourself.” He has even travelled across the U.S., from Harvard to Berkeley, to speak to college students about purpose and motivation.

The memory of wasting away as an accountant still haunts him today. In order to spare others from those dreaded feelings of purposelessness, Liu is determined to spread his own wisdom as much as possible. That doesn’t mean he thinks everyone should be an artist, though. Rather, Liu wants to inspire people to “be more deliberate in their life choices, to be more self-aware about their wants and needs and dreams, and to be unapologetically pursuant of that,” he says, punctuating each syllable.

Being unapologetically Asian is something Liu struggled with when he was younger. He frustratedly recalls his efforts to become the best athlete in his school, only to feel “invisible” and “looked through” by his peers. But instead of clinging to bitterness and victimhood, Liu opens up conversations about what it means to be an Asian male in Western society, one shirtless pic at a time. He insists that it’s not all about muscles and girls, but rather, how we choose to redefine the idea of Asian masculinity.

Redefining what it means to be Asian American for future generations is something Liu is consciously thinking about for his next projects. He exclusively reveals another project in the works, which involves a book deal from a major publisher. He’s not allowed to say much about this project, as well, but he describes it as a “pseudo memoir” about how his parent’s journey across the ocean influenced him and his family.

“It’s part of what I wanted to do for us all as Asian Americans—to make us a little bit more proud of where we come from, a little bit more sympathetic to what our parents did,” Liu says. “While being very grateful and respectful of what they did, turn towards the future and say, ‘What is going to be the path that we chart out for ourselves?’”

As someone who has struggled with adhering to traditional Asian aphorisms, such as “staying humble and keeping your head down,” versus the more Western ideals of pursuing quixotic dreams of becoming an actor, Liu finds solace in following in the footsteps of other North Americans of Asian descent, like Sandra Oh, who he toasted at the dinner for being one of the rare individuals on television to represent that particular heritage. And somewhere in Ontario, there’s a little Asian kid watching Jung on “Kim’s Convenience” and wondering what it would be like to rub elbows with him someday. 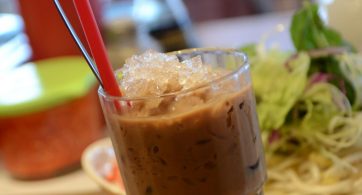 Boba milk tea is one of the great classics, and our summer favorite—the sweet, creamy drink will never go out of style as our ultimate caffeine and sugar fix. […]