On March 6, 2020, the city of Austin, Texas, decided to cancel South by Southwest (stylized as SXSW), one of the biggest annual tech, music and film festivals in the nation, due to rising concerns over the COVID-19 outbreak. The news broke a mere week before the festival was scheduled to kick off. In an interview with NPR, Austin Mayor Steve Adler stated that more than 100,000 people from all over the world were expected to attend and over $350 million in revenue for the city would be lost due to the cancellation.

But on March 6, there was more than just money to lose. Thousands of up-and-coming bands, startup companies, video games, films and businesses had stood to gain from this year’s SXSW, including indie artist Ginger Root and the event planning company LURLINE, but their opportunities for exposure and more tangible profits from the festival were crushed by the announcement.

Indie artist Ginger Root was just one of the many creatives affected by the decision. The musician and singer is also known as Cameron Lew, a half-Chinese, half-Korean film editor who started releasing music in 2017. Lew, who explains he “doesn’t take [himself ] too seriously,” first grew in popularity due to his unique sound and ability to direct and edit his own music videos. Ginger Root has since signed with Acrophase Records based in Nashville, and has garnered millions of listens on Spotify.

Although Ginger Root has found moderate success so far, the cancellation of SXSW was still a massive blow. Lew was on tour with his band (he’s often joined by a rotation of temporary players) when the announcement first broke. “It wasn’t until later in the day that I realized that this would affect the whole tour we were on,” Lew says. The travel arrangements that he had planned for himself and his other two performers had to be canceled, and he could no longer sell the merchandise he’d invested in. Despite the setback, Lew was concerned about more than just himself. “A lot of bands believe SXSW is their one shot to make it or get discovered,” Lew says. “I can just imagine how logistically, financially and emotionally it would have affected them, and the toll it would have on other artists.”

The future of Ginger Root is still uncertain, but Lew knows that he must stay productive. He’s using this time to practice playing his new album “Rikki” live and doing some live-streamed concerts for his friends and fans. “I’m just trying to be positive and not worry too much,” Lew says. “If we all just [stay] informed and not panic, and not hoard goddamn toilet paper, we should all be fine. And wash your hands, too.”

Besides musicians and other entertainers, many workers behind the scenes of SXSW found their plans upended by the cancellation. The event-planning and design agency LURLINE, which was hired to help craft a large art installation at the festival, had to cancel travel plans for their whole team. By the time they were notified, pieces they’d created for the event were already on the way to Austin. “Fabrication for the installation we were working on had completed, and the trucks were just starting their route,” says Stella Cho via email. She and Mike Saenz co-founded LURLINE, and they oversee daily operations. “Our team was technically supposed to fly out to Austin in the next few days, so all lodging and travel costs were a loss. By the time SXSW officially pulled the plug, we were past most deadlines for refunds.”

Fortunately, their project with SXSW wasn’t completely lost. While others haven’t been so lucky, Cho and her team were able to salvage much of their work. “The agency and their client decided they would have its first showing in North Carolina at the company’s headquarters, which ended up being a good trial run in preparation for future showings,” Cho says. “Hopefully, we’ll get to see the project go live later this year, after we come out of these troubling times.” 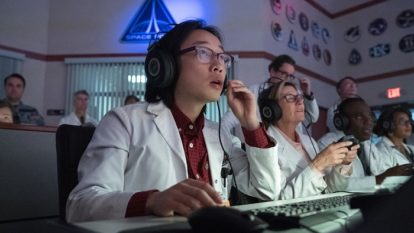 Three, two, one, liftoff—this May, Jimmy O. Yang is headed for the stars. “This is the weirdest day,” Yang’s character, Dr. Chan Kaifang, remarks in the trailer for “Space […]