Whether it’s a tornado of screaming fans moshing to the rapid rhythms of his drums or the screech of his skateboard grinding against a 20-foot-long metal staircase rail, sound dominates the life of Anaiah Lei. And at the age of 22, he is at the forefront of a new generation of young rebels carrying on not just one but two of L.A.’s proud traditions: skateboarding and starting a rock band.

At the respective ages of 9 and 12, Anaiah and his older brother Mikaiah formed the Bots. They played their first show at their neighborhood church, and would soon record a few singles and EPs before releasing their 2014 debut album “Pink Palms” on the Fader label. With tours of the U.S. and the U.K. with prominent acts like the Yeah Yeah Yeahs, Tenacious D and Blur, the duo was hailed by “Rolling Stone” as “Most Likely to Succeed” before they even graduated high school. The Lei brothers grew up in the L.A. suburb of Glendale with their Taiwanese father and St. Lucian mother. To say that they had a different upbringing than most first-gen Asian American kids would be an understatement. In the ’90s, their dad, Alex Lei, used to coordinate punk shows for Goldenvoice (the music promoter that founded and runs the Coachella music festival) and operated sound systems at reggae dance halls around Los Angeles. “Coming from an Asian family [and being into] that sort of stuff … I’m sure his dad––my grandpa—was not hyped on him going to shows or skateboarding,” says Anaiah. But so it was that father who would pass those passions onto his sons. Alex taught Anaiah how to skateboard when he was just 4 years old and bought Anaiah his first Tama starter drum kit when he was 8 (one year before joining The Bots). Anaiah credits his dad to molding his musical tastes, from David Bowie and Led Zeppelin to Bad Brains.

It was Mikaiah’s idea to start the Bots in 2006, and he roped in Anaiah to be its drummer. And though the Bots began as a garage band with five members, just a year later the group had winnowed down to the two of them. Together, they have fused together the sounds of their youth—everything from old-school punk and Jamaican dub to country twang and American blues.

Even with the success in music, Anaiah is still very much married to skating. He isn’t a professional skateboarder, but he’s known within the community with help from social media and videos on YouTube, as well as his board sponsor, Heroin Skateboards. And so it totally makes sense that Red Bull would ask Anaiah to be a part of its 2019 documentary, “LA Skate + Music.” He jumped at the opportunity, since it involved his two passions, and his favorite city. “It felt great being a part of it, representing Los Angeles,” says Anaiah.

His easy-going skate style parallels with his musical tastes. According to Anaiah, the music a skater listens to influences the way he skates, and vice versa. His go-to tunes are mostly comprised of jazz and classic soul acts, like the Ronettes, Curtis Mayfield and the Meters. “I like to cruise and chill a lot more,” says Anaiah. “If you compare how I skate to music, it would sound like that. It sounds so weird saying that.”

One act he definitely won’t be listening to while skating: his own. “When you’re making your music, you’re playing and listening to it a bunch,” says Anaiah. “I don’t think the first thing you want to do is listen to what you make. I’m pretty sure there are people who are into that, and that’s cool, but I think it’s generally known … it’s just kind of weird to hear your own music.”

And the ultimate taboo in his eyes? Seeing his songs paired with his skating videos. Anaiah prefers to keep his two creative identities separate. “It’s a bit of an overload,” Anaiah says with a laugh. “That’s me in the song, me in the video skating, and me playing the song.”

If he was forced to pick between skating or music, he wouldn’t hesitate to throw away his board for a pair of drumsticks. “I love to skate, but music is what I love to do.” says Anaiah. Thank goodness there’s no one telling him he has to choose. 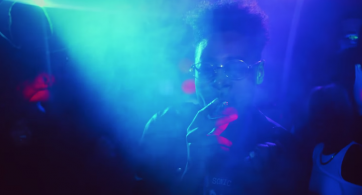 Big L once said “I’m so ahead of my time, my parents haven’t met yet.” For many of the rappers on our list, their parents (or grandparents or even […]