For a few months this summer, Osric Chau was “The Boss” to a crew of 74 in the Philippines. As a first-time feature producer, Chau — you know him from “Supernatural” and “Dirk Gently’s Holistic Detective Agency” — worked with director Andrea Walter to bring to life “Empty by Design.” A contemporary drama set in the Philippines, the film follows two strangers living overseas, a grad student in London and a movie stunt man in the U.S., as they return to their home country, find each other and connect over their mutual loneliness and desire to belong.

“This is a movie about isolation that parallels my life and Andrea’s life,” Chau said. “I grew up in Canada and I was always the Chinese kid in class. When I moved to China, I was a foreigner. Andrea was the white girl in the Philippines growing up, and when she went to England she was the Asian girl.”

Chau and Walter, who are roommates in Los Angeles, both realized at a certain point that they were tired of working on other people’s projects. Chau wanted to be part of the process. His buddy Chris Pang, who felt the same way, came on board to help produce. Dante Basco, who’d produced projects in the Philippines, connected Chau to JoAnn Cabalda Banaga, a local producer. They brought on Yoshi Sudarso, Desmond Chiam and Madeleine Humphries as additional cast.

Looking back, Chau calls the entire experience a lesson in trusting in his own stories. “We bought one-way tickets to Manila and I said, ‘I don’t know when I’m going to come back, but I know I just need to go there and do a film before I will allow myself to come back,” he said. “All we knew was that the story we had resonated with us.”

Once they found a patron in Cignal TV, a local network, they got to work. They had fires to put out, sure — the biggest one involved their lead actress having to pull out four days before shooting began. The team found Chau a replacement co-star — Rhian Ramos — but she signed on the day before filming started. “I don’t even know that she had a chance to read the entire script before we started,” Chau said. He was impressed by Ramos. “Her first day, there was a 14-page scene.”

But really, the project was an opportunity for Chau and his creative team to run a movie set the way he’d always wanted to see it done, from everyone eating together to cutting shooting days shorter than the norm in the Philippines, to mentoring some of the staff. “It was really cool to do the things I’ve always wanted someone to do for me if I was in their position,” he said.

No matter the scale or their success, he has learned that allowing himself to fail will move him forward. “[Asian American creators] should be supporting our stories and allowing ourselves to fail, because how else do you get better?” he said. “The fact that we did this project [is enough] — even if it doesn’t do extremely well, it will do enough to allow us to do more, and another chance at success. It will allow us to get better.” 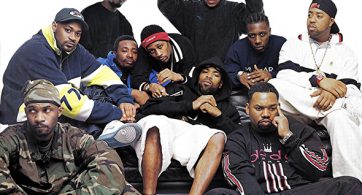 A drama series based on the Wu-Tang Clan, created and written by Alex Tse and the RZA, has received a straight-to-series order from Hulu. “Wu-Tang: An American Saga,” set […]