LeiLei Secor, a teen from upstate New York, was thrilled to be accepted into the University of Virginia. While this was certainly exciting news, Secor couldn’t ignore the daunting reality that attending a University as an out-of-state student would be very, very pricey. And let’s face it, we all know at least one Millennial who is currently drowning in student loan debt. Even worse, the job market had become so competitive by 2012 that even the task of finding a summer job seemed impossible.

“Like many 16 year olds, I was looking for a summer job,” Secor told kidpreneus.com. “I didn’t get hired anywhere I applied, so I thought maybe I could sell my jewelry online. Once I thought of this idea, I really liked it. It seemed like the perfect summer “job” for me because I could continue it throughout the school year because of the flexibility.”

Who could’ve known that this minor “summer job” would eventually become so successful, Secor would end up selling over 11,000 products to more than 40 countries?

The teen began by creating an Etsy shop called Designed by Lei which focused on dainty, wire wrap jewelry. Of course, her beautiful pieces became a hit– one of her product photos has been reblogged on Tumblr over 66,000 times– and she eventually began her own website. With no business background, none of this success was an easy feat. In fact, Secor had to rely largely on the internet and learning through experience.

“I tried to teach myself from resources I found online,” Secor explained. “In the beginning, I spent a lot of time researching ecommerce, Etsy and how to sell online in general. When it comes to selling on Etsy, all the details like pictures, keywords, product descriptions, product titles really make the difference. I still spend a lot of time reading forums and other articles that I think will help me improve Designed By Lei.”

Secor has continued her business in addition to attending college. She spends an average of four to five hours a day making jewelry in her dorm room. While many of us struggled with time management in college, Secor — who sells around 200-400 pieces of jewelry a month– seems to have mastered it. In fact, she was named the 2014 NFIB Young Entrepreneur of the Year during her senior year.

Don’t forget to visit her official website as well as her Etsy shop. 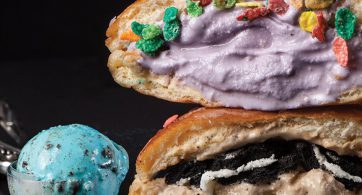 What should you expect from a bite of After Ice Cream’s Milky Bun? Be prepared for a mouthful of delightfully cold homemade ice cream stuffed inside a warm, glazed […]