The daughter of Chinese millionaires, Jubilee is everyone’s favorite mutant “Crazy Rich Asian.” Lighting up bad guys like the 4th of July, Jubilee calls her energy-based superpowers, “fireworks.” She is played by Lana Condor in “X-Men: Apocalypse.”

Japanese American U.S. Marine Benjamin Daimio is an unstoppable force. The half-jaguar, half-human character has survived death, ancient curses and even Hollywood white-washing. After Ed Skrein relinquished the role, Daimio will be played by Daniel Dae Kim in the newest “Hellboy” reboot.

The dark, brooding Katana is not someone you want to mess with. Equipped with a soul-snatching sword that hosts the spirit of her dead husband, Katana will literally stab the life out of you. Played by Karen Fukuhara, Katana appeared in the 2016 blockbuster “Suicide Squad.”

Colleen Wing (Jessica Henwick), best known as a sidekick and love interest in the Netflix series “Iron Fist,” isn’t just a supporting character. The expert swordswoman is a central protagonist in both the “Daughters of the Dragon” and “Heroes for Hire” comics. Avoiding spoilers, the third season of “Iron Fist” foreshadows Wing’s arrival as a leading lady.

The first Asian superhero was likely a shirtless man who dressed as a turtle and tried to overthrow Japanese occupation in China while wearing a speedo. While the original character hasn’t aged well, the Green Turtle has been given a modern makeover by Asian cartoonists Gene Luen Yang and Sonny Liew in 2014. The new series features a story that will be more relatable to first-generation Chinese American immigrants.

In last summer’s “Ant-Man and the Wasp,” Randall Park stole the show as goofy, gullible parole officer Jimmy Woo. While we loved Park’s take on the hero, his character is a major departure from Woo’s comic book incarnation. One of Marvel’s first mature protagonists, the original character was a no-nonsense S.H.I.E.L.D. agent. In one series, Woo even fought against Godzilla!

Grace Choi is a muscle-bound, inked-up heroine that possesses awesome strength and almost limitless endurance. Those badass abilities weren’t always used to fight crime—when she was younger, Choi marketed her brawn as a bouncer. The character debuted on television recently (played by Chantal Thuy) on the CW series “Black Lightning.” Choi became the first Asian LGTBQ+ superhero to appear on television.

Kato is the Green Hornet’s famous sidekick. He doesn’t have any superpowers, but he packs a mean punch and is a phenomenal mechanic and wheelman. There’s also a lot of star-power behind Kato—he’s been played by Bruce Lee, Keye Luke and Jay Chou.

It’s sort of confusing, but there are two Doctor Lights in the DC Universe. The one we’re concerned with is the Japanese scientist Kimiyo Hoshi. Unfortunately, Hoshi can’t always save the day. Her attention is divided between the Justice League and her children Imako and Yasu.

Indian teenager Raju Rai is the main character of Stan Lee’s “Chakra: The Invincible.” Rai’s powers come from his “chakra,” or focal points. Originally Rai was exclusively a comic book character, but his popularity lead to a “Chakra” Cartoon Network series and mobile video game.

One of the newer Asian heroes, Mona Wu (Ramona Young) goes from delivery girl to certified superheroine in “DC’s Legends of Tomorrow.” She has the ability to turn into a Kaupe, a werewolf-like creature with superhuman strength. When she’s not ripping bad guys to shreds, Mona is a kind caretaker of magical creatures.

Finally, the Marvel Cinematic Universe has its leading Asian man. The “Master of Kung Fu” pays homage to the legendary Bruce Lee, and is a prominent member of the Avengers. We can’t wait to see Shang-Chi share the screen with the likes of Spider-Man and Black Panther.

Move aside Sabrina! Nico Minoru (played by Lyrica Okano) is the spunky teenage witch from the Marvel series “Runaways.” While she’s awesome, we don’t think many will envy her superpowers. In order to cast her magic, Minoru must shed her own blood. 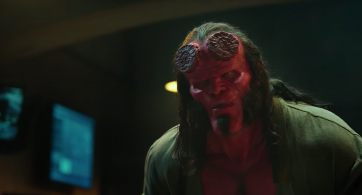 Who in the hell wanted another “Hellboy?” Take into consideration that the two highest grossing movies last weekend were “Shazam!” ($53 million) and “Pet Sematary” ($42 million) and you […]