Hearts are breaking all over the world as 30-year-old Korean American actress Jamie Chung announces that she is engaged and officially off the market.

Most known for her recent role as Mulan in the ABC fantasy television series Once Upon a Time, Jamie Chung is now engaged to 35-year-old actor Bryan Greenberg.

The couple began dating in 2012 and have kept their relationship on the private side. When Elle tried to get Greenberg to open up about Chung, he responded, “I don’t really talk too much about my personal life, but I’m happy.”

Chung, on the other hand, has been a bit more willing to speak about her love life. “He’s kind of suffering with me on my journey training for a half-marathon,” Chung told Elle during a September 2013 interview. “So that’s been our thing. He’s been running with me. The couple who runs together, stays together! We just stay pretty active.”

In Fall 2012, Chung revealed how she wants to spend her future to Audrey Magazine. “I just wanna do the things I love and spend time with the people I care about and cut out the bullsh-t. Life is too short,” she said. Thankfully, Chung seems to be well on her way towards a happy future.

US Weekly confirmed that Greenberg proposed in San Francisco during the holidays. The couple then went to celebrate the New Year in the Turks and Caicos Islands.

We certainly congratulate Jamie, an Audrey Cover Girl, and wish her a happy marriage. 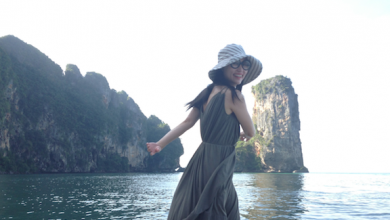 Pum Lefebure, graphic designer and co-founder of award-winning design agency Design Army, was born and raised in Thailand. So though she now lives in Washington, D.C., with her […]