Last week, Jeremy Lin called for unity among minorities when a former NBA All-Star made a comment on his new hairstyle.

The conversation started when Kenyon Martin made a comment via Instagram video on the Brooklyn Nets’ guard’s dreadlocks. “Do I need to remind this damn boy that his last name is Lin. Like, come on man. Let’s stop this man, with these people,” Martin said in the now-deleted video. “Like, there’s no way possible he would’ve made it on one of our teams with that bulls–t going on on his head. … Come on, man. Somebody really need to tell him, like, ‘Alright bro, we get it. You want to be black.’ Like, we get it. But the last name is Lin, alright?”

“Hey man. Its all good you don’t have to like my hair and definitely entitled to your opinion. Actually i legit grateful you sharin it tbh. At the end of the day i appreciate that i have dreads and you have Chinese tattoos bc i think its a sign of respect. And i think as minorities, the more we appreciate each others cultures, the more we influence mainstream society.”

After last night’s game against the Knicks, Lin spoke with reporters to talk about the hair controversy:

“[Martin] reached out and he was extremely apologetic. It was a great conversation. I think things were blown out of proportion, taken a little out of context as well. But me and him had a discussion where he was extremely courteous.”

“It’s not really about winning or losing. The whole point is that we’re trying to be unified,” Lin said. “If that’s what how he thinks, that how he thinks. My job is to be gracious and loving.” 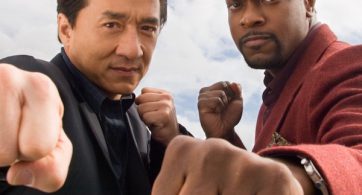 A fourth installment in the popular “Rush Hour” series may be in the works, if Jackie Chan’s comments during his “The Foreigner” press tour are anything to go by. […]