Lin, a California native, drew interest from several teams, including the Dallas Mavericks, whom he played for during the summer league, and the two-time defending champion Los Angeles Lakers. Scouts marveled at his elusive game and his better-than-expected athleticism. Ultimately, the deciding factor for Lin was the lure of playing for his home town Warriors, in front of his friends and family.

While Asian-born players such as Yao Ming have found success in the NBA, there has been a noticeable dearth—or rather, void—of Asian American talent—until now.

Lin is poised to become only the second full-blooded Asian American to play in the NBA, and the first in 63 years*. That he is a perimeter player who has to rely more on his ball-handling skills and athleticism, and not superior size (most Asian players in recent memory have been 7-footers), makes his accomplishment all the more extraordinary.

* During the 1947-48 season, Wat Misaka, a Japanese American, became the first non-white NBA player when he appeared in three games for the New York Knicks. 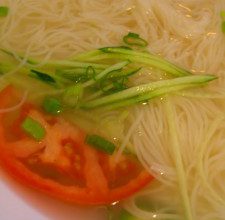 My wedding is in three weeks (holy moly!) and I am on a strict no white rice, no noodles diet. I just started this madness about five days ago […]