In the middle of a sultry June day, an expectant crowd waits for their next move. YouTuber JuNCurryAhn (née Jun Sung Ahn) directs their dance steps to TWICE’s “Signal” at KCON 2017 New York. He’s joined by fellow digital talent GoToe (aka Go Toe Kyung) and a few participants onstage, and once the music starts, a diverse group of young K-pop aficionados, mostly female, bust out the moves in unison. Sweltering humidity wasn’t enough to keep this hot-blooded legion away.

An arm of KCON USA, the convention at which these dancers find themselves — a showcase of Korean pop culture — is perhaps the most unique of its kind. Two full days of programming at the Prudential Center drew over 43,000 attendees to dance battles, panels, workshops and artist meet-and-greets, appropriately culminating at the end of each day with star-studded K-pop concerts. It’s an event entirely for the fans (KCON event organizers survey what fans want to see and monitor analytics on which artists are trending).

Some fans even camped out the night before to secure primo entry for the concert. Sarah Kesteloot, 22, explained the sense of community fostered by fans. “A lot of times at K-pop shows, because everyone does go this hard for every K-pop show I’ve ever been to, there’s really a wonderful sense of community at the front of the line, and I’ve gotten a lot of really, really good friends,” said the Michigan native.

The convention’s attendees included a few older fans, too. Angel Phillips, 42, came with her daughter from Philadelphia. “I’m here because I love K-culture, to me it’s bigger than just K-pop,” Phillips said. She first got into Korean pop culture by watching K-dramas with her mother back in 2004.

Perhaps the only trouble was deciding which booth to visit first. There was an enviably massive pot of ddeokbokki, or spicy Korean rice cake. Attendees could take photos while dressed in traditional Korean hanbok, or break a board after a demonstration with a taekwondo instructor. A massive outdoor tent housed the 2017 Mobile Masters Invitational, an E-sports competition sponsored by the Amazon Appstore. The entire side panel of another tent promoted “The Battleship Island,” an upcoming Korean film starring Song Joong-ki and So Ji-sub (distributed by an arm of CJ Entertainment, the same company producing the convention.)

Merchandise tables brimmed with T-shirts, pins, posters and albums (yes, actual CDs) which fans might be hard-pressed to find, fully licensed, in the U.S. otherwise. “BTS pins are always popular, and the MONSTA X [pins] are probably the most popular, because they’re coming, and then there’s G-Dragon,” said Katrina Lobaton at the East Coast Kpop Outlet, one of the many vendors set up at the convention.

Sponsors promoted all kinds of South Korean exports  — food, cosmetics, dramas, and even the upcoming 2018 Winter Olympics hosted in Pyeongchang.

Convention attendees had the opportunity to meet artists through fan engagement events, while panel topics ranged from “The Next K-Drama Star” and “Behind the Scenes of BgA,” to “Boy Beauty Class,” “Life in Korea with Edward Avila and Joan Kim,” and “Attack Of The Gamers!”  Audience members interacted with panelists in Q&A sessions, asking for advice on how to become an intern at KCON and pressing a member of BgA (Boys Generally Asian) for some tour dates.

And then we’ve got to talk about the dancing. Beats blasted from booths as participants rocked out to addictive numbers like BTS’ “Fire,” Big Bang’s “Fantastic Baby,” Got7’s “Girls Girls Girls,” Wonder Girls’ “Nobody,” and BLACKPINK’s “Boombaya.” No instruction needed here — most of them already knew all the moves.

The event is in its third year in the New York metro area, and has grown internationally since its inception in Los Angeles in 2012; it now includes Paris, Mexico City, Abu Dhabi and Tokyo. (KCON USA’s next stop is in Los Angeles in August.)

Pristinely dressed artists walked the red carpet briefly before the concerts, with KNK decked out in white suits and flashing mini hearts to fans, Zion.T in signature shades and Highlight shimmering in color-coordinated, dark electric hues.

The “M! Countdown” concerts featured KNK, GFRIEND, Zion. T, SF9, and Highlight. Night two brought artists Twice, UP10TION, NCT127, and CNBLUE. Artists performed a few tracks each, swiftly moving from one act to the next. Special performances included a rendition of “Beauty and the Beast” by GFRIEND’s Yuju and Highlight’s Dongwoon, and a personal “proposal” by SF9 members to one very surprised fan in the crowd. And then there was SF9’s dance cover of EXO’s “Call Me Baby,” so tightly performed, that no one would question if it was their own. The event concluded with pop rock band CNBLUE — when the camera suddenly cut to Minhyuk, the audience went nuts. He wasn’t dancing or singing (he plays the drums), and simply smiled at the reaction — and the screams came to an immediate crescendo.

It’s the Hallyu Wave in a comprehensive dose. Fans have formed friendships and communities, often united by feverish passion for a particular artist. It’s all niche, some might say, but tell that to the electrifying screams filling the 19,000-capacity Prudential Center. 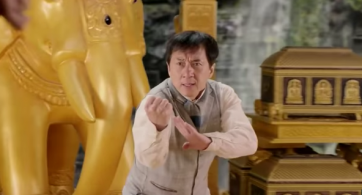 Jackie Chan plays an emotional father seeking revenge for the senseless death of his daughter in the new upcoming action film “The Foreigner.”  Regularly known for his stunts and […]