For Ki Hong Lee, it all started at camp. The Korean American actor first flexed his acting muscles while performing a skit at a church retreat.

“I just had so much fun with it,” says Lee. “I knew from that moment on, in the back of my mind, that I really wanted to give acting a shot.”

Lee, who was born in Korea and lived shortly in New Zealand before moving to Southern California (“That’s why I don’t have a New Zealand accent, unfortunately”), is a firm believer in doing what you love and never giving up. This mantra carried him through his first years of acting.

“I just went all in and started training and doing everything I could,” says Lee. “I did as much theater as I could, and I read every play that I could get my hands on.”

With the constant support of his parents, whom he calls his “biggest fans,” Lee gradually built his resume with a slew of small acting gigs, including playing a busboy in a Modern Family episode, a main character lead on ABC Family’s Nine Lives of Chloe King and various love-entangled roles in rom-com shorts by YouTube channel WongFu Productions. Already, the actor in his early 20s can count his stints of acting at camp retreats a thing of the past.

And when Lee found himself pitching tents and making s’mores over a campfire again, it was while bonding with castmates on the set for upcoming action thriller The Maze Runner.

The highly anticipated film, which hits theaters Sept. 19, marks Lee’s debut on the big screen. Set in a post-apocalyptic, dystopian society, the film (based on the best-selling, eponymous book by James Dashner) centers around a group of boys who end up trapped in an open expanse called The Glade. Surrounded by high stonewalls, the space is enclosed by a dangerous maze that changes its pattern every night—it’s virtually impossible to escape.

“I play this character who is the head leader of the maze runners, the group of boys who are selected to run the maze and figure out a way out,” explains Lee of his character, Minho.

A scene from ‘The Maze Runner’

He is focused on one goal: to help his friends survive and find a way out. Lee definitely breathes life into Minho, not only taking on the character’s personality, but also committing to almost every physical feat described in the novel.

“It was definitely an artistic challenge and a physical challenge every day… but we were so passionate about the project, you know? We had stunt doubles, but we never used them, Dylan and I. When we were running in the maze, that’s us running,” says Lee, referring to his co-star, Dylan O’Brien. “When Dylan was tired, I tried to push him, and when I was tired, he’ll push me. We kept each other accountable.”

The camaraderie that developed between Lee and his co-stars happened overnight. “It was bromance from day one,” confesses Lee, who says that the natural chemistry helped to translate the story credibly from paper to screen. “These characters have been in this place called the Glade for three, four, five years, so in order to get that kind of fluidity between characters, you need to spend time with your co-stars. But thankfully it kind of happened organically, it wasn’t forced at all.”

Lee says it was especially gratifying, as an Asian American actor, to get to play such a strong role in a major feature film. “We have this Asian character who is one of the leaders,” he says. “I really liked that it was different from any other role that I’ve crossed.”

Notably, the character of Minho was based on author Dashner’s real-life relative of the same name.

“I thank God mostly for that guy,” says Lee, laughing. “Without him being involved in James Dashner’s life, this would not have happened. It’s crazy how some of these things work out, and I’m just thankful for this opportunity to bring this character to life.” 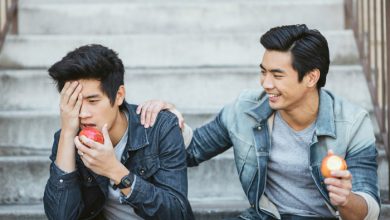 The sun is still beating down on us here in California, but we’re hopeful that cool fall weather will show up any day now (and save us from […]