The Los Angeles-based Wilshire Bank, now one-half of the newly formed Bank of Hope – the result of last week’s merging of Wilshire and BBCN, the two largest Korean American financial institutions in the nation – is facing a lawsuit on its hands.

A group of Korean nationals who believe they are victims of a visa scam started in 2006 by a local immigration attorney, Justin Moongyu Lee, has filed a lawsuit against Wilshire Bank, accusing the institution of fraud, negligence and breach of contract.

Lee acted as an investment manager for 97 Korean nationals seeking participation in the EB-5 visa program, which offers permanent U.S. residency for foreign investors who put at least $500,000 toward a new commercial enterprise in a targeted unemployment area that creates or preserves at least 10 American jobs.

Investors said they lost $47 million through Lee, who told them he would use their money toward biofuel plants and the ethanol market. They sued Lee and his company beginning in 2010.

Andrew Spielberger, one of the plaintiffs’ attorneys, told the Los Angeles Times that Wilshire “had a responsibility to protect these people,” and said investors believe the bank should have safeguarded their escrow accounts, from which Lee transferred smaller sums into overseas accounts. They also accuse the bank of maintaining close ties to Lee, including by employing one of his relatives.

“There have to be enough red flags that it’s tantamount to knowledge of or aiding and abetting fraud,” Spielberger said. “At some point, you can’t ignore what appears to be fraud and hide behind contractual limitations of liability.”

Browne Greene, another attorney on the side of the investors, told the Korea Times they had trusted Wilshire Bank to protect their investments. The Bank has refused to comment.

The Bank of Hope, meanwhile, has $13.2 billion in assets from BBCN and Wilshire, making it the largest Korean American bank, sixth in size among banks based in Los Angeles County and 82nd nationwide.

The bank is headed by former BBCN CEO Kevin Kim, with former Wilshire Chairman Koh Suk-hwa acting as chairman of the board. The Bank operates 85 locations. 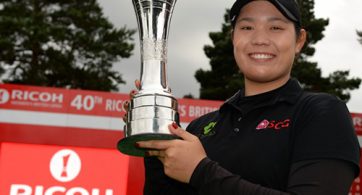 At age 11, Ariya Jutanugarn qualified for the 2007 Honda LGPA Thailand, becoming the youngest person ever to do so. Now, the 20-year-old has become the first Thai golfer […]