The Jeju Island “sea women,” or haenyeo, are perhaps one of the most unique examples of Korea’s indigenous cultural heritage. The title refers to female divers who dive for food in the sea—without any diving equipment or breathing apparatuses. The dives can last up to two minutes, and they can go up to 10 meters (over 30 feet) deep.

The Korean Cultural Service in New York has been holding an exhibition, titled Haenyeo after these women, since mid-March. With only a week left until it ends on April 10, it’s definitely something to check out.

The exhibition presents photos by Hyung S. Kim, who told The New Yorker that he traveled to Jeju Island several times between 2012 and 2014. He would set up a plain white backdrop near the shore and would ask divers to have their pictures taken right as they had emerged from the water—usually after five to six hours of work.

Kim’s work “expresses the joys and sorrows of the lives of haenyeo as well as their history” as he captures them in their natural states.

The history goes way back: The first record of haenyeo in literature was in 1105. In 2013, the Cultural Heritage Administartion of Korea applied to have the haenyeo registered by the UNESCO as an Intangible Cultural Heritage of Humanity.

The haenyeo culture has been gradually disappearing. In the 1960s, divers numbered above 20,000; now, there are approximately 2,500 divers who are still active. The vast majority of the remaining haenyeo are over 60 years old—the youngest is 38, and the oldest diver Kim photographed is over 90.

If you’re in New York and in need of something to do over this Easter weekend and break, be sure to check this out!

You can find more information at the Korean Cultural Services website. 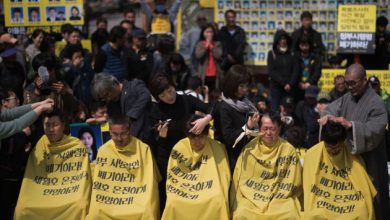