The 14-track album, which dropped today, is in English and Chinese, and features Jhene Aiko, Travis Scott and Rich The Kid. Murda Beatz, best known for his work with Drake and Migos, helped produce “November Rain.”

In a Complex interview, the 27-year-old explained the meaning of the album’s title. “The name ‘Antares’ itself is, like — a lot of people won’t get what it means — it’s actually one of the brightest stars in the galaxy. And in the Western culture it means that it’s the heart of a Scorpio,” he said. “So I’m actually a Scorpio, like my horoscope. And in China, it means it’s the heart of the dragon.”

Wu’s album drop follows a year of good fortune. Last October, he became the first Chinese artist to reach No. 1 on the U.S. iTunes chart with “Deserve” featuring Travis Scott. On Wednesday, he was named Louis Vuitton’s new ambassador for the spring/summer 2019 men’s collection.

The artist posted the album’s chart-topping success on Instagram:

Beast Mode all the way up #antares #1 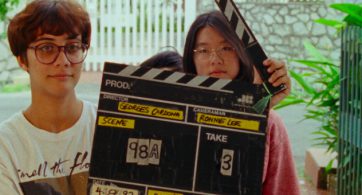 Roll film, and “action.” 1992 Singapore. A teenage girl (played by Sandi Tan) wearing a pink sailor top ambles gingerly through a quaint neighborhood. Instead of skyscrapers, the landscape […]