Walk into one of Poketo’s Los Angeles locations, and you’ll be greeted by a bright, minimalist layout complete with blocky, geometric print T-shirts, sleek Thousand bicycle helmets and reusable bamboo picnic plates. It feels as if every product you’ve ever dreamed of decorating your apartment or life with is here, available in a splash of primary colors. Owners and founders Ted Vadakan and Angie Myung say that, as with most businesses, the entire lifestyle brand sprouted from a few wallets— just not the way you might think.

“Angie and I started Poketo as a side project, or like an accidental business,” says Vadakan. He’s calling early in the day from the couple’s sunny L.A. home, which is arranged like the world’s most aesthetically pleasing Poketo showroom. “We wanted to get our artist friends together and have a big art show. But we found that many people weren’t buying original art, so we created a wallet for the show. The covers were designed by a lot of these artists that we invited, and it sold out. That was what kickstarted Poketo.”

When Vadakan invites Myung to comment, she replies in the muffled voice of someone who just woke up. “Don’t get me involved,” she says, with a laugh. But she does chime in, and together they tell the story of how Poketo came to be the charming, cute-cool brand it is today. After their first successful show, Myung and Vadakan (who had been dating for only a few months at the time) continued to hold exhibitions with their circle of friends and to design “accessible art,” with the goal of upgrading everyday objects like stationery and reusable grocery bags.

Now, over a decade later, Myung and Vadakan are married and “working together 24/7” on Poketo, which has four brick-and-mortar locations in L.A. and an outpost in Denver, Colorado. They also retail across the globe through more than 500 distributors. At their L.A. spots, Poketo also hosts weekly workshops, highlighting other artists and creatives. “We straddle this line of being mainstream and niche,” Vadakan says. “We have a very unique, creative audience, but we’ve also done collaborations with Target and Nordstrom. Our designs are about being relatable and approachable, without being dumbed down.”

That mission is evident in Poketo’s array of products, the result of Myung and Vadakan’s single creative priority: to do the things they want to do. That one goal has led the couple to design confetti-covered socks, hold cooking workshops and, recently, create a book. Set to be released in August, “Creative Spaces” takes a look at the studios, kitchens and homes of makers around the world, many of whom the couple know personally. But according to Myung, it’s much more about the creatives than their spaces. “It’s not necessarily an interiors or design book,” Myung says, as Vadakan soothes their Shih Tzu, Scooter, in the background. “It’s really about the artist’s journey, their stories and how all creatives share something. And what we share is the same point of view: everything is a work in progress, and you’re going to continue to grow.”

Besides “Creative Spaces” and an ongoing exhibit at the ROW D.T.L.A. location celebrating the book’s featured artists, Myung and Vadakan say there’s no set plan for what comes next, but the couple rattles off a laundry list of upcoming projects anyway, including a 10-city book tour and a forthcoming design line celebrating the 100th anniversary of the Bauhaus movement. They’re also releasing a selection of shoes in the fall, marking the couple’s first foray into footwear. “That’s what’s really great about having a hundred percent independent business,” Myung says. “You’re not really doing anything for someone else. You’re doing it for your own joy, and so you can grow.” 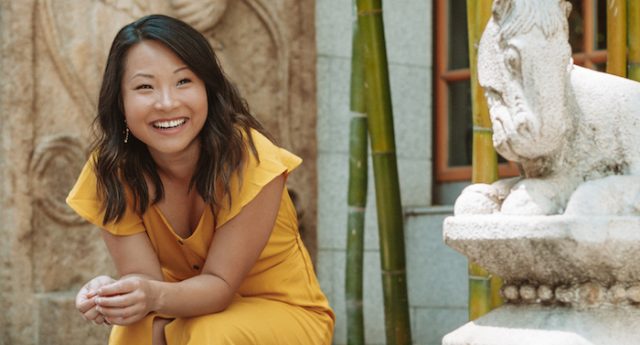 While droves of aspiring actors flock to Los Angeles every day, Helen Madelyn Kim fled her hometown of Tinseltown as soon as she could. With fantasies of directing her […]