Starring John Cho as Spike Spiegel, Daniella Pineda as Faye Valentine and Mustafa Shakir as Jet Black, the show premiered on Friday, Nov. 19. Based on the hit anime of the same name, “Cowboy Bebop” follows three “space cowboys” on the ship Bebop, traveling around the galaxy seeking bounties on interplanetary outlaws. Alex Hassell and Elena Satine also star, and the series is executive produced by showrunner André Nemec.

Although the anime only ran for twenty-six episodes (or “sessions”) from 1998 to 1999, the series generated a dedicated fan following that still exists today. Shakir said he and the rest of the rest of the cast and crew all kept those fans in mind while making the live-action series. “It was a collective sense of responsibility about you portraying it in a way that the Bebop fans could love,” Shakir said. “As André Nemec says, this is a love letter to the fans.”

But the new “Cowboy Bebop” isn’t just a shot-for-shot remake of the anime. While still remaining true to the original, the Netflix series takes familiar elements and characters in new directions. “Everyone had such care and attention to live up to and be in the spirit of the anime, but also to try and expand it as a world,” Hassell said.

That expansion includes aging up the characters, a casting choice that was widely questioned at the time of its announcement. Nemec, however, explained that there’s a good reason behind the change. “Spike Spiegel is a cowboy with a broken heart, and all of us know that cowboys need a little bit more mileage on the odometer to really feel like cowboys,” Nemec said. “The other thing that really was evident to me is that it’s 20 years later, and I may have related to Spike in my 20s because Spike was in his 20s. But now I’m 20 years older and there are certain experiences I’m taking with me. We all got a little bit older in the time between the anime and this show.”

Regardless of if you’re a diehard “Cowboy Bebop” fan or a complete newcomer to the series, there’s something in the show for everyone to enjoy. “2021 and 2020 were such hard years and this is such a nice escape for people,” said Pineda. “And also, even if you’re not into sci-fi, it doesn’t matter, because tonally our show goes so many different places and there’s something in it for everyone.”

Watch our full interview with the cast and Nemec above, and check out “Cowboy Bebop” on Netflix. Until then, see you later, space cowboy. 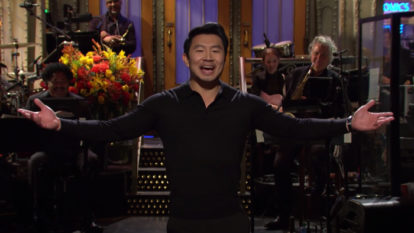 The “Shang-Chi and the Legend of the Ten Rings” star hosted an episode this past Saturday, Nov. 20.