An ode to America’s now-obsolete analog past, the series “Blockbuster” comedically explores who and what it takes to make an unexpectedly small business succeed. Yoon (Randall Park) manages the very last Blockbuster still in business, and has made it his life mission to ensure it continues not only to operate but thrive in a world of streaming services and five-second video. The show also stars “Brooklyn Nine-Nine” actress Melissa Fumero and (ironically) premiered on Netflix on Nov. 3.

In finding a lead actor to play Yoon, showrunner Vanessa Ramos shares that she had envisioned Park in the role from the get-go. “Timmy was written in the original pitch as Randall Park, just because he’s kind of who I heard in my head in terms of how he hits jokes and his delivery on things,” Ramos said in a recent interview with Character Media. “Even when I think other actors could play it loser-y, [Park by contrast] is just winning and you’re always on his side.”

Fortunately for Ramos, Park instantly felt a connection to the role, citing his own thought process as similar to the character. “Timmy is very much an analog person holding onto the past, and that really rings true to me,” Park said. “I used a lot of my own worldview when it came to Timmy.”

What’s really great, explained Ramos, is how “Blockbuster” proudly features a solid cast that happens to be very diverse. With most of the ensemble inspired by family members and friends from her own personal life, “Blockbuster” highlights a predominantly Latinx cast. Park added, “It really shows the breadth of humanity that exists within these underrepresented communities,” he said. “Complicated [and flawed] characters; these are all things that are still groundbreaking when you see them.”

Check out our video above for more in-depth insights! 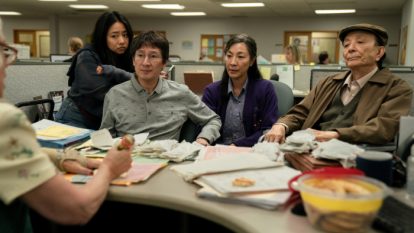 Take a peek into the wild and wacky multiverse of directing duo Daniels’ labor of love, “Everything Everywhere All at Once.”