If you’re ready to sink your teeth into a fun new show this October, look no further!

In a modern society populated by beautiful, fit and self-obsessed vampires, an unlikely hero must navigate the world and its obstacles as a newly turned creature of the night. That hero is the sweet and charismatic Reginald the vampire, played by Jacob Batalon. Known for playing Ned Leeds in Marvel’s “Spider-Man” film series, Batalon is now leading his own TV show, “Reginald the Vampire,” that he hopes can reach audiences with messages of body positivity.

An Asian vampire? Those are few and far between in Hollywood (virtually non-existent, if we’re being totally honest). But not only is Reginald played by an Asian American actor, Reginald’s culture is very much a part of his character. “[The producers and I] all absolutely wanted to make it a point to put my culture and my heritage a part of the show,” Batalon said in a recent interview with Character Media. “A part of our messaging, besides being the hero of your own story, was diversity and inclusivity. The way that we preach unapologetically that I’m from Hawaii and that I’m Filipino was all very much on purpose.”

Batalon went on to discuss the need for thoughtful Asian American and Pacific Islander representation, and his desire to be a part of this new wave of AAPI inclusivity. “That’s a very big narrative that I myself would like to be a part of,” he said. “Because growing up, obviously, for us, not really seeing people who looked like us on TV or movies for that matter … being the lead of something was basically impossible to even imagine.”

Aside from playing a role in AAPI representation, Batalon hopes the show can spark some much-needed dialogue on body-positivity in Hollywood. “Body shaming and self love are things that we don’t really approach in Hollywood,” he said. “Our point was to drive home the fact that … words absolutely do affect people mentally and emotionally.”

Furthermore, Batalon urged viewers to examine their own perceptions of beauty and expectations for how to live life. “We as a society are so caught up in what Hollywood tells us is beautiful, and what is perfect and what it means to be a hero or a loser or the bad guy,” Batalon said.

In light of all these serious messages, Batalon still took a moment to point out the show’s comedic purpose. “It’s a really fun, enjoyable show,” he said. “We’re not looking to push or break records or win Oscars or Emmys. We’re just a really great, light-hearted show that everyone would enjoy.”

For more insights, watch our full interview above with Batalon above! 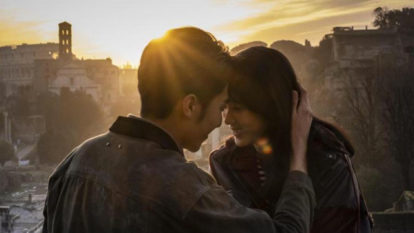 The Chinese film will screen in Costa Mesa’s Triangle Theater next Wednesday, Oct. 19 as part of the festival’s international spotlight series.