Complete assh*le superheroes, or “supes,” are back in full force on Prime Video. Season three of the critically acclaimed series “The Boys” dropped on the streaming service at the beginning of June, and according to actress Karen Fukuhara—who plays The Female, AKA Kimiko—the new episodes bring more blood, guts and even some human vulnerability.

For those who haven’t watched, “The Boys” takes place in a dystopian world in which supes (jerks at best and pretty much murderers at worst) abuse their power and influence, all indiscretions covered up by the PR company Vought. To combat their unchecked debauchery, a CIA black-ops team seek to expose and police the superheroes who abuse their societal standing. Kimiko is a team member of The Boys, who will stop at nothing to defeat the supes—or will she?

In an interview with Character Media, Fukuhara detailed her character’s development throughout the third season. “[Kimiko] really goes through a self-discovery this season, and in the beginning it’s all positive. She’s enjoying life for the first time and everything is bubbly,” she said. “But then, things quickly turn and she has to take a hard look at herself and try to figure out whether this life within The Boys is really for her.”

In addition to showcasing characters with complex arcs, the series’ bombastic premise stays firmly in check, strongly rooted in reality. “Our show is full of special effects, and blood and gore, and the big dynamic moments,” Fukuhara said. “It’s always grounded in human relationships, and not everything is black and white.”

To learn more about The Female’s arc, and the three words Fukuhara uses to describe the third season, check out the video above, and remember to stream “The Boys” on Prime Video! 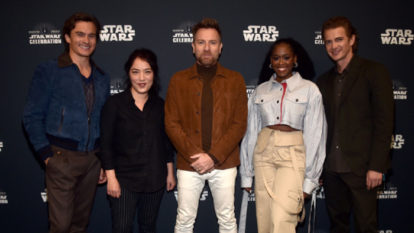 This year’s event took place at the end of May and brought together fans, actors and creators for a weekend-long slate of events.