Loosely based on the 1990s “Doogie Howser, M.D.,” the sitcom that launched the career of Neil Patrick Harris, the Disney+ reboot follows prodigy Lahela Kameāloha. Played by “Andi Mack”’s Peyton Elizabeth Lee, Lahela must juggle her professional career as a medical doctor and her personal life as a teenager growing up in Hawaii.

Centered around a mixed-race family, this updated take on the classic comes from the mind of “How I Met Your Mother” and “Fresh Off the Boat” executive producer Kourtney Kang, who, like the characters, grew up in a biracial household in Hawaii. “I was born in Hawaii and I always wanted to do a show there,” she confessed. “I grew up watching [“Doogie Howser”] and I was a really big fan of it. This is the version that I would have most wanted to see back when I was 12 or 13.”

“Doogie Kameāloha” stars a number of mixed-race actors, including “Mulan”’s Jason Scott Lee, who reflect Hawaii’s large demographic of Asians and Pacific Islanders. As someone who is Native Hawaiian and grew up on the Islands, the role was especially meaningful for Jason Scott Lee, who plays Kameāloha family patriarch Benny. “It’s such a wonderful feeling … especially being around the local crew, and a lot of the cast members are from the Islands,” he gushed. “Being able to play a character that is from there and adding all the nuances that were my upbringing is fun to do. I never had that opportunity.”

Star Peyton Elizabeth Lee was also grateful for the opportunity. “It’s always been very important for me, being a biracial girl, that biracial people are seen on TV and seen at the center of their own story,” she said, pointing out how the series focuses on Hawaiians, a group of people who are often overlooked. “We did our very best to create the most authentic portrayal of that experience.”

She not only connects with her character’s background but also her character’s journey. From one wunderkind to another, she pinpoints where she and Lahela share similar struggles. “Being an actor at a very young age, there is that same feeling of … being a kid in an adult world [with] those very adult pressures and responsibilities and expectations put on you,” she revealed. “And the pressure to grow up quickly to meet the standard—for me at least it was very important to … carve out space to be a real human being and to be a kid and to be allowed to grow at my own rate.”

Watch the full interview above to hear more and watch “Doogie Kameāloha, M.D.” on Disney+. 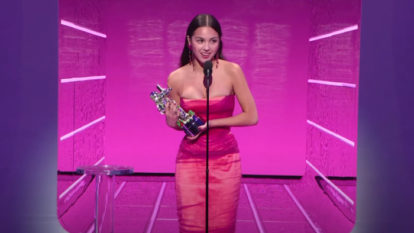