From “Pride and Prejudice” to “The Princess Diaries 2: Royal Engagement,” there’s nothing quite like seeing two rivals slowly fall in love. And the newest season of “Bridgerton” certainly knows how to use this tried-and-true trope to satisfy fans.

The second season premiered last month on March 25 and brought new faces to the “ton,” continuing to follow the upper crust of British society as they navigate the all-important wedding season. This time, the spotlight is on the eldest Bridgerton son, Anthony (Jonathan Bailey), who plans to find himself a suitable wife as shrewdly and quickly as possible. Romantic hijinks ensue when the Sharma sisters—the prickly Kate (Simone Ashley) and the sweet, charming Edwina (Charithra Chandran)—find themselves both entwined with the viscount.

Each member of that on-screen love triangle came together to discuss the show and share their insights on how the series creators added more diverse characters to this new season.  Ashley and Chandran both praised the writers and producers for their work on their characters’ Indian backgrounds. “What’s really special about it is that [the Sharmas] don’t just happen to be brown, but they’re Indians; they’re immigrants in London,” Chandran said. “It informs their characters and it’s thoughtful representation.”

Ashley agreed, recalling that when she and Chandran shared a makeup trailer, they would often start their days on set excited about their scripts and just how much care and effort went into honoring their characters’ heritage. Bailey added his own compliments toward the show’s creative staff, especially their executive producer, Chris Van Dusen. “There’s so much trust in Chris, because he’s so brilliant at making sure everything is woven in and grounded,” Bailey said.

Watch the full interview above to hear the cast’s perspectives on their characters, and don’t forget to watch the new season of “Bridgerton” on Netflix! 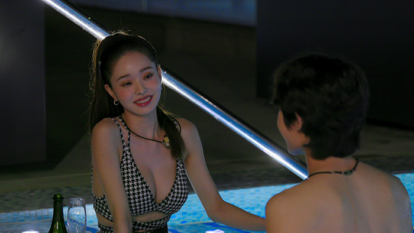 The Korean reality dating series has just been confirmed for another season at Netflix.