A 79-year-old grandma gamer, a “streets barber” that gives homeless people fresh cuts and a hootin’-hollerin’ vendor who sells produce out of his truck are just a few of the individuals that “60 Second Docs” has covered. When John Zhang calls, he’s just spent his morning attending meetings and assembling campaign pitches for more of these signature short documentaries.

Zhang has been hands-on with “60 Second Docs” since the series’ inception three years ago, which was about the same time as he was hired as the head of marketing at Indigenous Media, a digital-focused studio. Zhang helps run the marketing operations for a variety of content initiatives at Indigenous, including “Sickhouse,” a feature film released live on Snapchat, and “Five Points,” one of Facebook’s first scripted dramas. But he dedicates most of his day-to-day to the documentary series. “In three years, it grew to 4 billion-plus video views and 7.5 million followers,” he says. “60 Second Docs” was also recently recognized by the Webby Awards as a Winner for Documentary Video Series & Channels.

If you’re not immediately familiar with Zhang’s work, you’ve probably seen at least one or two “60 Second Docs” floating around the Internet on your social media platform of choice. The mini documentaries tell people stories. And the reporting style that “shine[s] a light on stories that are right underneath the surface,” Zhang says, grows from his degree in journalism. “Journalism is, at its core, storytelling, and being authentic and unbiased when covering a story,” Zhang says. “A lot of that translates into my marketing experiences. In high school and college, my dream was to become a sports broadcaster. But my sophomore year in college, I had an internship with MTV in New York City, and that was one of my first big city experiences. That gave me the idea, ‘Oh, this is what I really want to do.’”

From then on, Zhang did everything he could to build up his resume and get his foot in the door at MTV. But how he eventually made his way in was less than conventional, to say the least. “I actually won an MTV VMA Sweepstakes,” Zhang says. “The main winner got arrested and had to go to jail. So, they called me the Thursday before VMA weekend, telling me that I was the alternate winner. At the VMAs, I connected with one of the marketing executives at MTV. A couple of months later, she told me she had an assistant opening. I flew to New York, got the interview and got the job. If I didn’t win that Sweepstakes, I don’t know what my path would be like.”

That path has diverged more than a few times. Although Zhang’s first forays into journalism began with sports (he reps the Carolinas as a Clemson and UNC fan, in case you were wondering), he now keeps up with social media trends just as closely as he does with sports trades. And although his career has deviated from sports broadcaster to marketing executive, Zhang is proud of the fulfillment he receives from his job. “Marketing-wise, my job is to make sure great stories are seen,” Zhang says. “There are plenty out there, but if no one sees them, it’s difficult for them to matter. So I get a lot of joy when I see people reacting to the stories we tell. And I read the comments and emails of the videos’ subjects on how the videos have changed their lives. I feel lucky to be in a career where I can use my creativity and have a real impact on people’s lives.” 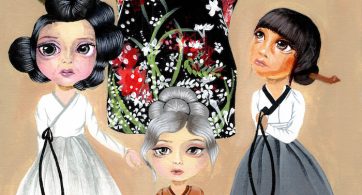 For each issue, we choose an unproduced screenplay and present it to you as a one-page description of the proposed movie. A talented and promising illustrator then reimagines the […]