For each issue, we choose an unproduced screenplay and present it to you as a one-page description of the proposed movie. A talented and promising illustrator then reimagines the story as a picture. If you have a submission, please email editorial@charactermedia.com with your feature film treatment or screenplay.

We didn’t have to look far for this month’s contributor: It’s Editor-in-Chief of “Character Media,” Serena Kim. Born in San Francisco, she moved with her mom, dad, two older sisters and grandma to L.A.’s Koreatown when she was 2.

Kim won a full scholarship to study at Ewha Women’s University in Seoul. She also attended the Yonsei Language Institute while teaching English to students. Her Korean-language skills would prove to be useful decades later when she relocated to Korea in 2014 to work as a marketing manager for Samsung Mobile HQ in Suwon.

Kim is also a hip-hop scholar, having written for major hip-hop magazines in the ’90s and ’00s and served as the features editor at the award-winning music magazine “Vibe.” She was widely published in the “Los Angeles Times” and the “Washington Post.” She has been running this magazine since last year.

​Set in pre-World War II Japan, a pair of resourceful Korean sisters outsmart their way into running a successful kimono studio. But when they’re cheated out of their fortune by the yakuza, they must find a way to survive.

Jae, 22. Born and raised in Japan, this ethnic Korean woman is a smart and talented seamstress with a sharp eye for beauty. With her bone-straight black hair chicly bobbed in the latest flapper-girl style, a bindi-like mole between her eyebrows and a wiry strength, she is a faithful acolyte of the beauty muse. She reads the latest magazines and learns to dress like a Westerner. She loves her family fiercely, but her fiery Korean temperament means that she can act in hurtful and brutal ways. Despite the Japanese prejudice against Koreans, she feels an unshakeable sense of self-confidence and believes she and her family are entitled to equal treatment. Against all odds, she is ruthless in her quest to succeed.

Yoon, 19. Jae’s sweet and supportive sister is shy and soft-spoken. Yoon is equally as talented and smart, but is afraid to voice her ideas and opinions. Most people assume she’s a perfect Japanese lady because she is so timid and submissive. Because of her loyalty to her sister, she helps Jae in the atelier, but has her own goals of making fine ceramics. She’s plumper and has soft, curly hair. She likes to wear traditional Korean hanboks, even though it embarrasses Jae. Sometimes Jae is horribly cruel to Yoon, but Yoon must learn to stand up for herself.

Young, 22. This handsome, yet impoverished art professor from the local school falls in love with Jae when he sees her in the marketplace. He’s attracted to her modern style and dynamic personality. In his art, he bucks the so-called “Oriental” style of painting that is popular with art collectors. He chooses to paint in a bold, modern way that confuses and angers the other artists in his school. His goal is to move to America and someday have a gallery show in New York City.

Umma, 50. Yoon and Jae’s mother is a beautiful and troubled narcissist, whose writing career is fading, along with her once-legendary looks. She is tall, auburn-haired and yellow-eyed, with a strong, commanding voice. Though she seems powerful, she’s weak and defensive. Unhappy in her second marriage, she is married to a reclusive and childish painter who resents her daughters. Their biological father abandoned them when they were children, and Umma is still paralyzed by her hatred of him.

Hiro, 50. This dashing but short-statured yakuza gangster was cruel to animals as a child and is now cruel to Koreans. Ironically, he himself is an ethnic Korean who tries to mask his true identity by tormenting Korean immigrants. At first, he lulls Yoon and Jae into a sense of security and familiarity with his charm, but eventually the relationship evolves into him extorting money from them. As a collaborator, a traitor and a snitch, Hiro is the lowest life form.

In the first act, we meet Yoon and Jae as little girls in Japan. They are at school wearing rough linen hanboks and are ridiculed by girls wearing elegant silk kimonos. Jae looks enviously at their kimonos’ fine detail. She envisions herself wearing one, being beautiful and luxuriating in the silks.

Because Jae is lost in thought, she is distracted when the teacher calls on her. She hits her with a ruler, and she cries. Yoon consoles her, and they run through the alleys and rice paddies and play with dolls in one of the rooms of their shack. They tear up scraps of their old clothes and make homemade kimonos for their dolls. Jae makes a perfect kimono for her doll. They laugh and mumble softly to themselves.

Fast forward to the 1920s. Yoon and Jae are now adults working in a kimono studio. Yoon is hunched over bolts of fabric and cutting patterns. Jae works with a client, fitting the sumptuous robes over her little shoulders and pinning parts. She holds up contrasting fabrics for the obi. The client looks pleased.

Hiro enters the dress salon, and the women go scurrying for cover, including Yoon and the client. Only Jae stands unfazed by the short man’s presence. He gives her a deadline to deliver money that the yakuza has been demanding—or else Yoon will be shipped off to be a comfort girl for the Imperial Japanese Army, and their studio will go down in flames.

Together, the sisters and their flawed mother must somehow outsmart Hiro and raise enough funds to secure their safety and the security of their studio. Their quest involves three challenges: find the money that their missing father has left for them, destroy Hiro and the yakuza who are leeching off of the Korean community, and lastly, overcome their own struggles as a family in order to make peace with their Korean culture. It’s only when the sisters learn to work together that they find a way to succeed in designing Korean hanboks for their own community.

My connection to Koreans of pre-World War II Japan is that my biological father was born in Osaka in 1938 and moved to Korea when he was 13. He dedicated his life to studying politeness and honorifics in Korean and Japanese linguistics. His academic quest was to prove that the Korean language’s parallel structure was intrinsically equal to Japanese, and not inferior, as Japanese scholars had previously postulated.

As a child of Korean immigrants in America, I see that we in the U.S. face similar problems as our forebears did in Japan. In both instances, our culture was denigrated and deemed inferior and unrefined by colonial imperialists. Although the Korean hanbok is perceived as simple and homely, it’s a beautiful and modest garment that’s good for hard work and child-rearing. Like much of Korean culture, function comes before form, instilling it with a practical, rustic beauty. 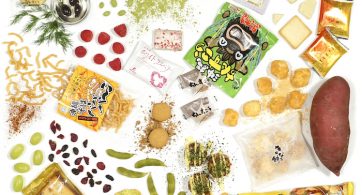 Open up the cheerful orange packaging of a Bokksu box, and a variety of treats spills out: pillowy mochi, rum raisin Kit Kats and peppery senbei rice crackers. Sampling […]