Twelve Asian Pacific Americans grace the pages of Kore Asian Media’s first fold-out cover for its 2018 Annual Issue, each with their own story of struggle, sacrifice and success.

Here’s a peek at the stories included in the FREE issue, available for order at charactermedia.com/subscribe:

People have been telling Awkwafina she would be famous ever since she got her first 500 views on YouTube. She never put too much stock in those comments then, and still doesn’t now, even with the biggest projects of her career on the horizon.

You’ve seen Ross Butler playing all-American jocks on Netflix’s “13 Reasons Why” and the CW’s “Riverdale,” but what do you know about the effort it took to get the chance to play the popular athlete, not the nerdy best friend? Read his story here.

For two decades, Grace Park’s been one of TV’s toughest, most recognizable heroines, whether it was as cop or Cylon. Now, with the beaches of Hawaii behind her, she’s embarking on a whole new journey.

Behind Karrueche Tran’s picture-perfect exterior is an actress determined to show everyone what she’s really made of, “Claws” and all — gossip rags and the public’s obsession with her relationship with ex-boyfriend Chris Brown be damned.

If there ever were a social media superheroine we could all get behind, it’s “Agents of S.H.I.E.L.D.” actress Chloe Bennet, who uses her platform to effect change, and who’s recently taken up community advocacy to another level through a new grassroots organization.

Jo Koy, who’s now selling out comedy shows across the country, is a living testament to the long hustle. Twenty-eight years, if you want to be exact. Read his story here.

Life is good for Leonardo Nam, who with HBO’s “Westworld” finds himself in one of his biggest projects to date. Of course, it’s been quite the journey here…

Ask Ludi Lin whether we can look to him as an eventual leading man to really connect the American and Chinese film industries together, and he’ll tell you it takes a team to build a bridge…but he’d like to be the beam of that bridge.

It took guts to create “Gook,” an indie triumph of 2017 that offered Justin Chon’s deeply personal look at a racially charged time not so long ago that shook Los Angeles.

You may see designer clothes and an enviable lifestyle on @wendyslookbook, but Wendy Nguyen’s roots lie deep in social advocacy.

2018 is gearing up to be a big year for Lana Condor, who’s set to lead “To All the Boys I’ve Loved Before” and appear in “Deadly Class” and in “Alita: Battle Angel.” And no matter where she goes, there’s one blessing she never forgets. Read her story here.

For a closer look at the cover stories, plus interviews with APA talents and game-changers like Daniel Dae Kim, Min-Liang Tan, Mitski, Danny Pudi, Amy Okuda, Ally Maki, Sweater Beats and Celina Jade, order a free copy of the issue at charactermedia.com/subscribe. 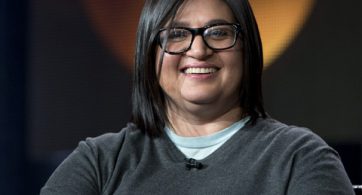 Nahnatchka Khan is confirmed as director for Randall Park and Ali Wong’s unnamed Netflix original, according to Variety. This will be Khan’s directorial feature debut. She’s best known for […]