Michael Yo is renowned for his lighthearted sense of humor, but in a post on his Instagram (@michaelyo) on March 30, the comedian and actor showcased a more vulnerable side of himself. “I had pneumonia and corona at the same time, which, you know if you’re watching the news, that’s the deadly combo right there,” Yo says, in an emotional video recounting his time spent in the hospital.

The news stunned many of his followers and friends, including Awkwafina and Dumbfoundead, who expressed sympathy and congratulations for his recovery. Yo is a well-known figure in the Asian American and Pacific Islander entertaining community, having risen to fame in the comedy scene with his 2018 Amazon special, “Michael Yo: Blasian.” He also hosts a podcast, “The Michael Yo Show,” and he’s appeared as a guest on a few notable others, including “The Joe Rogan Experience.”

Although Yo’s a healthy guy in his mid-40s, he took news of the COVID-19 pandemic seriously from the beginning. “I took all the precautions; I was wearing masks and gloves,” he says over the phone, about a month after his recovery. Though he’s in good spirits and health now, he still sometimes pauses to clear his throat.

But even with all the necessary precautions in place, Yo could tell that something was off in early March after a visit to New York. “I isolated myself for three days because I just didn’t feel right after coming back,” Yo says. “Then on the fourth day, I had really bad shortness of breath. I was gasping for air, so my wife had to call 911.”

After arriving at the hospital, Yo’s chest X-ray showed that his lungs were filling with fluid. He was immediately transported to the intensive care unit, before doctors were even able to confirm whether he had the virus. Yo recalls asking his doctor, frightened, if he’d be okay. The response he received was less than reassuring. “He looked at my X-ray and went, ‘Look, this is going to go really good or really bad, and we’ll know in two days.’”

Those two days turned into four, during which Yo struggled to breathe and grappled with excruciating migraines. “The pain I felt that day, and the next day, and half of the third day was the worst pain I’ve ever felt in my life,” Yo says. “And they didn’t tell me I was going to make it until four-and-a-half days in.” That’s when Yo’s fever finally broke, and though he had to stay in the hospital for another four days to treat the rest of his symptoms, he and his medical team knew that the worst had passed.

After eight days spent in the ICU, Yo was finally able to return home and finish his recovery in an isolated bedroom, away from the rest of his family. “It was so tough because my son’s 3, and we didn’t tell him I was in the house,” Yo says. “So I would hear him running around, I would FaceTime the family all the time, but if he knew I was here he would try to break down the door. When I finally got out, we pretended like I drove up, and I just got home. It was amazing to finally hang out with the family.”

Despite the seriousness of his illness, he’s also been able to see a silver lining in his experiences. In serious times like these, it can be tough to find a reason to smile, but Yo’s not shying away from bringing his real-life experiences to the stage. Once it becomes safe to do so, that is. “Oh, I’ve already started writing jokes about it,” Yo says, laughing. “I know in my next special, I’m going to have a pretty significant bit about it because a lot of funny things happened in the hospital. It made me think outside the box, and there’s a lot of crazy thoughts that went through my head.”

Yo’s also sure to emphasize that he’s been fortunate in his recovery. Thousands of COVID-19 patients are dying alone in ICUs across the country, unable to be with family and loved ones in their final moments, and Yo urges everyone to take proper precautions against the virus. “It can happen to anyone,” he says. “If you feel fine and think you don’t need to wear a mask, you could be asymptomatic, and you could be really affecting other people’s lives. Just watch the news, you see people dying alone. Why would you want to be the cause of that? So many people are being selfless; this is no time for anybody to be selfish.”

But to the people who are undergoing the same thing he and his family went through, Yo offers simple words of hope to keep up the battle against the disease that’s now claimed more than 200,000 lives worldwide. “You can beat it,” Yo says. “If you’re fighting this, keep pushing. Don’t give up.” 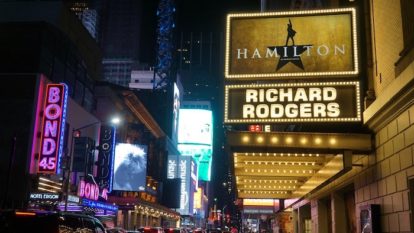 New York City’s Times Square, the once-bustling tourist attraction swarming with thousands of visitors from all over the world, is now left empty and deserted under quarantine policies. Broadway […]