It looks like Mindy Kaling and Awkwafina will join a high-stakes heist in the coming “Ocean’s 8” film, a female-led spinoff of the popular original trilogy, according to Deadline.com.

Kaling and Awkwafina – a rapper and actress whose real name is Nora Lum – are reportedly in final talks to join a high-profile cast that includes Sandra Bullock, Cate Blanchett, Anne Hathaway, Rihanna and Helena Bonham Carter.

The movie, directed by Gary Ross (“The Hunger Games”) and produced by original series director Steven Soderbergh, will begin filming in New York in October.

Kaling – who rose to fame in “The Office” – recently wrapped up the fourth season of her show “The Mindy Project.” Awkwafina, whose father is Chinese American and whose mother is Korean, stars in the MTV comedy series “Girl Code” and has a burgeoning acting career, with an appearance in “Neighbors 2: Sorority Rising” earlier this year. 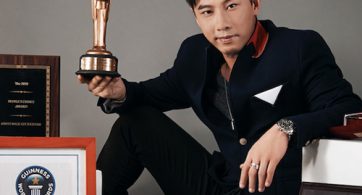 The international magician, Louis Yan, is set to amaze audiences with his magic show, “The Moment” at the Pechanga Theater in Temecula, California, on Aug. 27 and 28, as […]