You might know the central characters of “Never Have I Ever”—but how well do you know the cast themselves?

The Netflix series follows Devi Vishwakumar (Maitreyi Ramakrishnan), an Indian American teen seeking to improve her high school social status while dealing with grief from her father’s unexpected passing. Since its 2020 premiere, “Never Have I Ever” has become a favorite show on Netflix, leaving countless fans with questions after the cliffhanger ending of season two. Luckily for us, season three premiered on Aug. 12 to provide some answers.

During our recent interview, series stars Ramakrishnan, Darren Barnet, Jaren Lewison, Ramona Young, Megan Suri, Lee Rodriguez, Poorna Jagannathan and Richa Moorjani shared what they’re most excited for audiences to watch in the new season, their dream teachers at Sherman Oaks High and what they love about their fellow cast mates. Without giving too much away, the cast offered one-worded responses on what is to come this upcoming season, teasing more drama, more love triangles and more hot new characters.

Catch the full interview above and watch the latest season of “Never Have I Ever,” now streaming on Netflix! 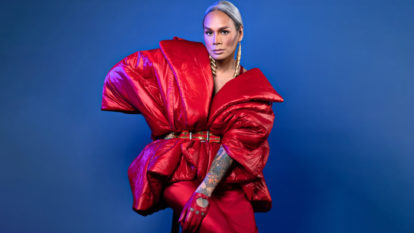 Over a decade after her initial win, Raja Gemini reminds the world just who she is on the all-winners season of “RuPaul’s Drag Race All Stars.”