Audrey Chu’s 19-year-old personality bubbles across the cross-continental phone connection like a geyser. She quickly names her favorite ice cream flavor (cookies and cream, if you’re wondering), expresses her love for the burrito-wrapping chain Chipotle and talks about how she’s been learning how to ollie. Then, in a hushed, but playful voice, she requests that her manager not be told about the sprained ankle she sustained as a result of her skateboarding endeavors.

The up-and-coming rapper and singer goes by the stage name of just “Audrey.” Though she was attending New York University’s Clive Davis Music Institute, Chu decided to take a break from school to devote herself to her art. “School is super, super expensive, and it’s amazing, but it’s just a lot of debt and a lot of financial burden to put on my family, as well as myself,” Chu says. “So, I decided to take a year off, and so far it’s been amazing. It’s proven to be a really important time for me to just figure myself out. And yeah, I think I’m going to be doing this full time from now on.”

Now this Korean American teenager with braided pigtails is striving to prove herself in a genre historically dominated by masculine African American personalities. But Chu is unfazed by the challenge. “I’ve never been one to shy away from something because it’s uncommon or kind of weird,” Chu says. “Like, ‘Oh, a Korean American girl rapping.’ My whole life has been: ‘You’re supposed to be this way.’ But that’s just not who I am. It’s really hard for me to fake it or to limit myself because of what other people think the way things should be. I just want to be an artist who does whatever the heck she wants in the moment.”

Combining elements of rap, soul, R&B and trap, Chu’s music straddles the border between familiar and fresh. It’s hard to nail down any one label onto her sound. Not that she would ever want that. “I just see myself as a creator,” Chu says. “I rap and I sing, but I kinda just want to do what I want to do at the moment. I want to be an artist who goes places that isn’t necessarily the norm, just where their intuition takes them.”

Her musical journey started in the sleepy township of Manalapan, New Jersey, where she spent most of her childhood where many first-generation Korean Americans do: in front of a piano. But after years of practicing scales and arpeggios, she realized that her musical calling was to be something more than a piano benchwarmer. At the age of 10, Chu got her first taste of performing in front of live audiences by singing “The Star-Spangled Banner” and “America the Beautiful” at sporting events. Her first gig was at the 2009 U.S. Open Tennis Championships. “Singing has always been my thing,” Chu says. “I’ve been singing my whole life. [Piano] helped a lot, but now I wouldn’t say that I play piano. I can play basic chords. But it is a goal of mine to understand theory and music more.”

Chu began writing her own songs in high school. She found her calling as a rapper by pure happenstance. One day while Chu and her friends were listening to the beats on a music video, Chu began spitting lyrics off the cuff. The experiment would become her first song, “Honeypot.” “I didn’t even think about it consciously, like, ‘Oh, this is rap and now you’re a rapper,’ or anything like that,” says Chu. “It was just freedom of expression. It just felt right.”

The inspiration for her songs come to her in a variety of ways. Sometimes hearing something as simple as a guitar chord may trigger a flow of creativity. “My writing process is honestly different every time,” Chu says. “Sometimes I’ll come in with lyrics. Sometimes I’ll be listening to instrumentals and a melody will come, and I’ll just fit the words over that.”

What is constant is Chu’s fixation on the concept of paradoxes. Her lyrics do center on the usual rap fare, like the pitfalls of love and wealth (or lack thereof), but they also delve into what she calls “the ironies of the Korean American experience.” “Being Korean American, I feel like I grew up walking this fine line between worlds constantly,” Chu says. “I never felt fully Korean and I never felt fully American, but I’m a part of two worlds now. I’ve learned the balance, and that definitely comes out in my writing.”

Chu lists popular lyrical giants like Kendrick Lamar, Kanye West and A Tribe Called Quest among her musical influences, but also old-school songstresses like Whitney Houston and Sade. Chu makes it clear that she isn’t trying to be anyone else, though. Just herself. “My friends always ask me, ‘Who are the artists that you want to be like?’” Chu says. “My answer to that is that I don’t want to be like any other artist, per se, but I wanna be like them in the sense that I don’t want to be like any other artist. I look up to them for their individuality and their ability to be true to themselves. That is always my goal: to have creative freedom and to go in foreign territories that are not yet vegetated—Is that even a word?”

Syntax aside, Chu describes her plans for the future with a passion and fervor that could only originate from the mind of an artist in the prime of her youth. She has a lot on her plate. “Right now, I’m working on a full album,” Chu says. “Definitely some videos because I’m all about visuals. And a tour. At some point I want to do a pop-up restaurant and make clothes, but that’s way down the line. I just want to make music that’s a little courageous, but that I believe in first and foremost. That’s what’s most important to me.” 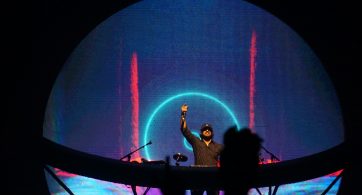 Over a thick vape cloud emitted by what looked (and smelled) like half of Los Angeles, floated a disk of kaleidoscoping colorful lights, and in the center of that […]