Daniel Henney first graced our screens — and our hearts — with the hit South Korean TV drama “My Lovely Samsoon,” where he played the charming and loyal Dr. Henry Kim. Fast-forward 12 years later, and he has successfully transitioned to breakout roles in the U.S., booking parts on blockbuster hits like “X-Men Origins: Wolverine,” stints on “Hawaii Five-0” and a series regular role as Matt Simmons on the recently canceled “Criminal Minds: Beyond Borders” (a spin-off of CBS’s long running police procedural crime drama “Criminal Minds.”)

Luckily, it’s not the end for Matt Simmons, a military veteran-turned-special operations agent. This week, it was announced the actor will reprise his role in the 13th season of the original “Criminal Minds,” as a series regular.

In celebration of his reprisal, here’s our favorite Daniel Henney roles to date:

Henny stars in his first role, a supporting character, as Dr. Henry Kim, a sweet, caring and handsome doctor who, under the guise of wanting to connect to his roots (Dr. Kim is half-South Korean and white, as is Henney), follows his patient Hee-jin (Jung Ryeo-won) to South Korea. This behavior may be frowned upon by the hippocratic oath, but who would say no to exploring the lovely city of Seoul, eating san-nakji (live octopus) and catching midnight movies, with this sweet faced doctor? (We’d fake an illness to have him as our nursemaid.)

Below is a clip of Dr. Kim trying san-nakji for the first time. Henney had asked the director not to rehearse this scene so that his reaction would be genuine, and it really is:

Henney goes from sweet to deadly with his turn as Agent Zero in the first standalone Wolverine film, starring Hugh Jackman, Liev Schreiber and Ryan Reynolds. Like Wolverine, Agent Zero is a fellow victim of the Weapon X program, though he has embraced the dark side. He’s a deadly mercenary gifted with powerful sniper skills and expert tracking ability. Despite the role being Henney’s first foray into Hollywood, Henny takes on the role with confidence and charm.

Take a look below at Agent Zero in action. No man stands a chance:

Bill in “One Night Surprise”

Racy rom-com “One Night Surprise” has Henney showing off a different kind of charm, this time as a charismatic lout who might or might not have accidentally impregnated his co-worker Michelle (played by Fan Bingbing, a fellow Marvel alum, who was cast as Blink in “X-men: Days of Future Past”) during her wild, drunken birthday bash. Described as a Chinese version of “Knocked Up” meets “The Hangover”, the film allows Henney to stretch his comedic muscles and really embrace his role as the smooth-talking, head-turning boss man who evokes those hate-that-I-love-him, love-that-I-hate-him kind of feels that we have for that one special bad boy.

Here’s a compilation of Henney in “One Night Surprise,” the video very appropriately set to Britney Spear’s “Womanizer”:

Next is Henney’s voiceover role in “Big Hero 6,” the breakout animated film by Disney that gave Pixar a run for its money, and went on to win an Academy Award for Best Animated Feature at the 87th Academy Awards. Henney stepped into the recording booth for the film to voice Tadashi, the loving older brother and mentor of Hiro, the film’s protagonist.

Check out Henney in action, recording scenes for the film. In this scene, Tadashi rescues Hiro from illegal bot fighting and scolds his genius, younger brother for his recklessness:

Henney successfully immerses himself into the role of special agent Simmons, who is sharp, reserved, and a real man’s man, in addition to being a husband and father to four kids. Henney first appeared as Simmons in the “Criminal Minds” season ten episode “Beyond Borders.” Following the appearance, he joined the spinoff series “Criminal Minds: Beyond Borders” as a series regular. Though the spinoff was canceled in May after two seasons of low ratings, he’s been brought back onto the flagship show to reprise his role.

Below is a clip of Henney in the season two episode “Pretty Like Me,” in which Simmons’ adoptee mother, on her deathbed, asks him to find her biological mother in South Korea: 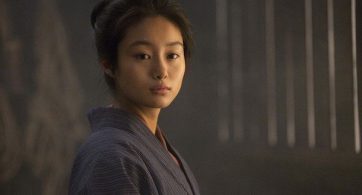 Japanese Australian actress Shiori Kutsuna is joining the cast of “Deadpool 2,” according to Deadline. Known for previous works such as the indie film “Oh Lucy!” with Josh Hartnett […]