Self-proclaimed “geek” (according to his Twitter bio) and “Kim’s Convenience” star Paul Sun-Hyung Lee is taking his expertise in all things nerdy to the small screen as the host of the upcoming series “Fandemonium.”

“Fandemonium” will see Lee exploring different fandoms in each episode, showcasing the different creative subcultures. The series will navigate how artists, makeup artists and even builders use their love for different mediums to produce stunning creations, from replica props to one-of-a-kind fanart. The series is produced by nonfiction TV company Great Pacific Media, owned by “Kim’s Convenience” producer Thunderbird Entertainment Group.

Lee, himself a lifelong fan of franchises like “Star Wars,” hopes the series will help shine a light on how creativity and fandom intertwine. “I’m excited to be collaborating with Great Pacific Media to celebrate fandom in all its forms and show the world the positivity and impact that being a fan can be,” he shared in a Variety exclusive.

“Fandemonium” marks another exciting addition to Lee’s résumé after the success of “Kim’s Convenience” and his appearances on “The Mandalorian.” He’ll also portray fan-favorite character Uncle Iroh in Netflix’s upcoming live-action “Avatar: The Last Airbender” series.

To catch Lee in another fan-favorite franchise, be sure to check out “The Book of Boba Fett,” currently airing on Disney Plus. 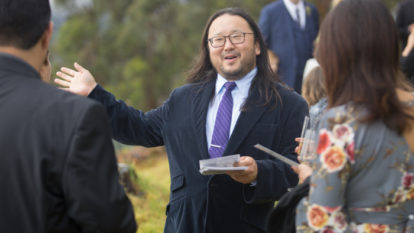 A look back at the life of Koream Journal’s longest running editor.