It’s no secret that the K-pop industry thrives on the good looks and talents of hundreds of teen idol groups. But where did the term “idol” originate?

Meet Glen Choi, former member of the first ever K-pop teen idol group, IDOL. Born and raised in Los Angeles, Choi was scouted to be a part of the South Korean teen duo when he was only 13. Debuting in February of 1996 with the song “Bow Wow,” IDOL quickly rose to fame, winning No. 1 on SBS Inkigayo, a popular South Korean music program. Their debut marked a turning point in K-pop, opening a floodgate of ’90s idol groups, including H.O.T., S.E.S, Baby V.O.X., Sechs Kies, Shinhwa and Fin.K.L.

“K-pop at that point was not even called K-pop because nobody outside of Korea was listening to it,” Choi tells KoreAm over the phone. He adds that it was especially difficult for his group to appear on TV, as networks received complaints from parents who worried that their children would abandon their studies to pursue entertainment.

Although IDOL disbanded within a year of its debut, Choi’s career in music did not end with it. He continued to influence K-pop as a DJ under the moniker dj nüre and as a music director of Artisans Music, a Los Angeles-based collective of songwriters, producers and artists. He has collaborated with many prolific artists in Korea and the U.S., such as Pitbull, Taboo of Black Eyed Peas, Baby Bash, Wonder Girls, f(x) and Kim Hyun Joong.

His most recent project is 2PM’s catchy party anthem “Go Crazy!” which he produced with his team (Danny Majic, Fingazz and Dustin Tavella) and 2PM’s lead vocalist, Jun.K. Within its first week of release, the music video attracted over 5 million views, and the song topped the Oricon Chart in Japan. In addition, 2PM’s world tour, with the U.S. leg kicking off this week with concerts in the New York, Chicago, Dallas and Los Angeles areas, carries over the title track’s carefree spirit and is even named after it.

“I think all of that was such a blessing,” Choi says of the song’s enormous success. “This song has been almost a year in the making, so to see all of that lead up to the release, it’s incredible.”

What’s more incredible is the fact that Choi and his team produced the trendy song with Jun.K entirely through Kakao Talk. It was a slow and painstaking process with both parties sending media files and notes over their phones, but Choi is proud of his team’s efforts and the quality of the final product.

“It’s not just because it’s our song, but I have fun watching the performance. It’s exciting,” he says. “I think that’s more palatable for an American audience because it’s fun and lighthearted, and it’s done really well. It’s really well choreographed.”

The collaboration began thanks to Choi’s longstanding relationship with the label’s CEO and producer JYP. The two had known each other since the ’90s as K-pop artists, and had kept in touch over the years, leading Choi to participate in various creative projects, such as the Wonder Girls album in 2011.

Despite being a seasoned producer, Choi rarely interacts with K-pop artists in the production process, a common quirk in the K-pop industry. This leaves Choi to often discuss important creative decisions with label executives, who usually don’t have a background in music unless they’re from the “Big Three” labels: SM, YG and JYP.

“I think this may be the first time I’ve [directly] worked with an artist in Korea,” admits Choi, referring to Jun.K. “In America, you’re always working with the artist.”

Another key difference in producing for K-pop versus American pop music, the Korean American music producer points out, is the former’s fast turnover rate, which is often due to the songs’ lackluster quality.

“The songs are made a little fast in K-pop, and that’s just because the speed at which society runs in Korea is that much faster,” he says. “As much as we think we’re on our phones here in the U.S., people are on their phones in Korea about two times more.”

Due to South Korea’s rapid media consumption, Choi explains that K-pop prefers dynamic and catchy melodies in order to attract immediate attention, whereas American pop songs tend to have more repetitive and simpler melodies for a longer shelf life.

“Lately, hip hop records in the U.S. have been lacking in melodic structuring or use a classic song to sample, which isn’t anything new. K-pop records tend to have a type of energy that keeps the pace moving,” he says.

Perhaps the reason behind K-pop’s breakneck pace is the market saturation of idol groups. Since the mid-2000s, K-pop has grown into a multibillion-dollar industry— Time magazine recognized it as South Korea’s “greatest export” in 2012. Every label aims to cash in on the K-pop boom, hoping to create the next BIGBANG or Girls’ Generation, but the competition is brutal with up to 60 rookie groups debuting every year.

“In Korea, you gotta do whatever it takes,” Choi says, laughing in disbelief at the Korean music industry’s grueling work ethic. “You have to sell, sell, sell your pants off in order to get your record played because that’s just the level of what they’re willing to do to make it happen.”

But tenacity pays off in the K-pop world. Whether you’re a rookie singer or a veteran making a comeback, a good song is undeniable, and it charts. According to Choi, there are many Korean indie artists who are incredibly popular among locals and even top Korean music charts. However, since these artists do not appear on popular Korean music programs or variety shows on TV, their music does not necessarily expand globally.

Choi also notes that while K-pop has evolved tremendously in terms of visuals, its music has become stagnant in recent years. But as more K-pop idols test international waters, he believes that there is potential for K-pop to push boundaries and strive for authenticity.

“There’s a lot more room for experimenting in K-pop, which is why I’m really excited about it,” says Choi. “There is so much room for growth not only musically and artistically, but [also on a] worldwide [scale].”

As a producer working in Korea and the U.S., Choi says his goal is to fuse the best elements of the American pop music industry with K-pop to allow more authentic projects to be made. He believes that, in order for K-pop to become palatable for a Western audience, there needs to be more “fusion of foreign productions”— something that K-pop has already made headway with by recruiting famous foreign producers like Harvey Mason Jr., who composed EXO’s “Overdose” and Girls’ Generation “Mr. Mr.”

Choi also cites the case of 2NE1, whose song “I am the Best” was featured in Microsoft’s Surface Pro commercial, as a path that K-pop artists should consider for penetrating the U.S. market. He says that “forming strategic alliances with U.S. artists and corporations” is the most effective and possibly the only way for K-pop artists to succeed in the States.

“Like Gangnam Style, it will be very difficult for that to happen again,” Choi says.

As more K-pop stars gain credibility in the American market through collaborations with popular Western artists, Choi’s K-pop philosophy seems to be working. 2NE1’s CL, for example, has recently signed with Scooter Braun for her upcoming American solo debut after she steadily rose to popularity in the U.S., thanks to her strong ties to American fashion designer Jeremy Scott and her appearance on a Skrillex/Diplo track.

It’s an exciting time for K-pop as artists break new barriers worldwide, Choi says. He also admits that while he loves producing music for the U.S., working in K-pop has been a rewarding experience as he shares a common bond with K-pop artists today.

“[Jun.K] found out that I used to be a singer … after we started working together. He just thought I was some producer, and then he was like ‘Oh my god! I can’t believe it,’” Choi remembers, adding that there is a special senior-junior relationship between singers in Korea. “We had a good moment with that. It was fun. And for me to see him performing and remembering what I used to do, I just feel really proud.”

Choi recently made a TV appearance with other ’90s K-pop idols including members from bands H.O.T., Sechs Kies and G.O.D. Watch the clip below: 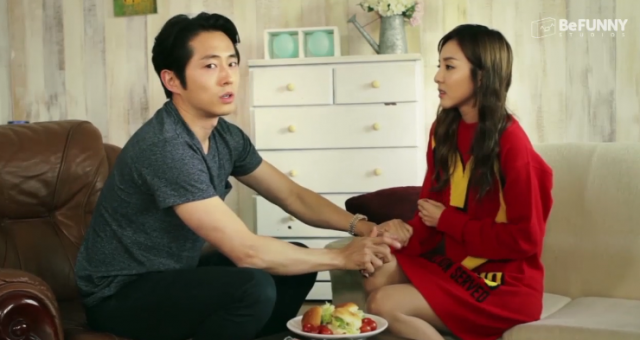 We never thought we’d see The Walking Dead‘s Steven Yeun and 2NE1’s Sandara Park — two of our favorites — collaborating together. So you can imagine our excitement when […]