It’s a gnarly world out there, wouldn’t you agree? Sometimes all any of us need is a book filled with aww-out-loud puppies. And that’s what we get from Grace Chon’s “Puppy Styled,” which shows dogs before and after Japanese-style haircuts.

“Standard dog grooming we’re used to here [in the U.S.] is breed-standard cuts … [where] a poodle’s cut like a poodle, a Yorkie’s cut like a Yorkie,” said Chon. Think classic pom pom tails for poodles, or long beards for Scottish terriers. “Japanese style is really different. The only rule is to make the dog look as cute as possible, by looking at the dog’s individuality and seeing what style is going to bring out the dog’s ultimate cuteness.”

Chon’s background in the advertising industry has a lot to do with the friendly, sleekly put-together aesthetic of her work. Ten years ago, she was working as a commercial art director—a self-described workaholic—when she brought home Maeby, a rescue Whippet/Doberman mix with perky ears.

The shelter told her they needed nice headshots of the other dogs up for adoption. So she bought her first professional camera to help. Just nine months later, she quit her job to take up photography full-time.

“This was in 2008, when the economy was in the toilet,” Chon recalled. “People thought I was crazy. I’d just gotten a raise. Fifty percent of the ad industry had been laid off. And there I was going, ‘I’m going to quit to become a pet photographer!’”

Her gamble paid off: In 2014, she created a viral photo series in which she gave matching outfits to Jasper, her newborn son, and her other rescue dog, Zoey. In 2017, she released her first book, “Waggish,” a collection of photos depicting “the infinite expressions of happy dogs.”

The idea for “Puppy Styled” came during a shoot with Boo the Dog, a legend among canines who boasts an online following in the tens of millions. Chon learned that Boo is groomed in a Japanese style, and loved how visually striking the cuts were. She teamed up with her friend Andrew Kim, the owner of the Healthy Spot pet stores, and his team of groomers to take before-and-after photos of nine pooches.

Her photos, posted online, went viral—again. “I want people to feel something when they look at my work. Usually that reaction is happy, or you squeal because it is so cute, or you laugh,” she said. The Japanese-cut photos made people envious. “[The stores] were getting calls like, ‘I want so-and-so to groom my dog to look just like this picture.”

A book deal happened not long after. And after a three-day shoot inside a grooming salon, “Puppy Styled” features 43 man’s and woman’s best friends—these were all pets, no professional dog models here—getting this Japanese-style makeover.

“It’s really this idea of individuality and the power of transformation,” Chon said. “I think that’s something we can all relate to!” 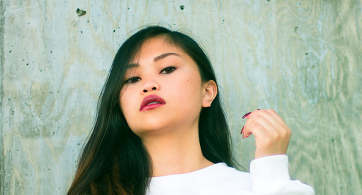 Sitting on her living room floor when she was 4 years old, Ruby Ibarra heard Filipino rapper Francis Magalona for the first time. While his lyrics about social injustice […]