Sitting on her living room floor when she was 4 years old, Ruby Ibarra heard Filipino rapper Francis Magalona for the first time. While his lyrics about social injustice went over her head at the time, his command over the beat sparked a deep appreciation for hip-hop in her that has bloomed into an artistic obsession with the power of words.

Though she’s primarily a rap artist, Ibarra also dabbles in spoken word and it shows in her music. Her lyrics utilize imagery and a metered structure that can only be described as downright poetic. She’s a wordsmith with an undeniable knack for infusing her songs with fire and passion, and for being vocal about issues that affect Filipina woman, namely racism and colorism. Like most young creatives, Ibarra began her journey as a humble bedroom artist writing song lyrics on her mattress since she was 13-years-old. Needless to say, Ibarra has since evolved into an expert lyricist.

After her family moved from Tacloban City to the San Francisco Bay Area, Ibarra found herself fully immersed in the world of hip-hop. She began to follow local rappers like Hieroglyphics and E-40 and attended a Common concert in high school. Ibarra felt immediately captivated by his performance.

“That was my first introduction to what it really means to be an MC, and how a poet can have the entire audience’s ears and eyes on him just by having a way with words,” Ibarra said. “It’s when I realized how powerful words and rap music really are and how you can use it as a means to share a story.”

In songs like “Playbill$” and “US,” Ibarra effortlessly flows between English, Tagalog and Waray, a dialect of Bisayan. When she began writing lyrics, she initially incorporated her multilingual abilities as a way to flex. It wasn’t until she began working on her first album, “Circa91,” which was released in 2017, that she started to think more about the role language could play in her art.

“If I didn’t have Waray or Tagalog in my music, I’d be doing a disservice not only to the album but also to my story as an artist,” Ibarra said. “When you think about communities like where I live in the Bay Area, there’s no way you can not hear a language other than English. It’s an honest and true reflection of how America is right now.”

In addition to a burgeoning music career that includes touring much of the West Coast this spring, Ibarra can now put the title of “director” under her belt, with the music video for “US.” The track is a Filipina-exclusive collaboration with Rocky Rivera, Klassy and Faith Santilla. As soon as the first beat in the music video drops with the foot stomp of a tiny ballet dancer, Klassy begins to sing the chorus: “Island woman rise/ Walang makakatigil/ Brown, brown woman, rise/ Alamin ang yung ugat.”

The Tagalog phrases translate to “no one can stop us” and “know your roots,” respectively. It is a song that celebrates historical Pinay leaders like Nieves Fernandez, as well as unsung, everyday heroes like immigrant moms. Featuring the faces and talent of more than a hundred Filipina women from Ibarra’s community, dressed in both modern and traditional garb, the music video is an anthem of Filipina pride.

“I lived my life to write this album,” Ibarra said. “When I released this album, I was very much married to it. I already had the images in my head before we even recorded the song in the studio. Having that play out in real life felt, to me, like I was 100 percent a genuine artist.”

But perhaps the biggest part of what makes Ibarra so compelling as an artist is the fact that she sets out to succeed on her own terms, without compromises.

“It’s very important for me to keep making music because when I do shows and I see the first three or four rows, I see that they’re girls that look like me,” Ibarra said. “I think the only thing that we can hope for as artists is to inspire other people.” 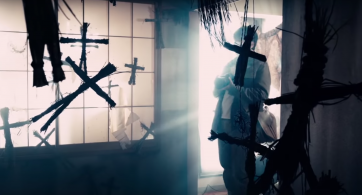 Fans of those creepy, Asian folktales that have spread across the internet like wildfire are in for a big treat. HBO Asia’s first original horror anthology series “Folklore” premieres […]