To celebrate APAHM and the launch of our new name, Character Media, we’ll be sitting down with notable Asian American creatives working in entertainment for a series of Q&As during the month of May.

Deborah Lee is a San Francisco Bay-based illustrator who toils in the tech world by day and works on her webcomics and debut graphic novel, “In Limbo,” by night. Lee’s work is characterized by a clean, bold illustration-style and expert knack for storytelling.

Her recent clients include the likes of NPR, Discovery Inc. and The Chan-Zuckerberg Initiative. When she’s not drawing or writing, she can be found training for her next half-marathon, interacting with fans on Twitter and Instagram or thinking back to the time in her adolescence when she accidentally joined a “fantasy internet cult.”

We chatted with her to catch up on her creative endeavors, learn more about the graphic novel that she has in the works and what sparks joy in her life.

How did you get into illustration? Have you always considered yourself an artist?

I’ve always drawn. I doodled all the time when I was younger. I didn’t really understand the difference between art and illustration until a few years ago, but I always had this relationship with illustration where I thought I could do it, but I couldn’t quite do it. I had to make a compromise by going into graphic design instead. The university I went to is very engineering focused and a lot of people go into tech. I stopped drawing for a while, and I think that made me sad. It wasn’t until my senior year that I realized that I was going to pursue art.

What kinds of stories do you like to tell in your art?

I really like to express melancholy emotions, a very solemn environment and mood, and I think that it’s something that comes naturally to me.

I lived in Alabama for a while when I was younger, and I often thought about “How do I make art or writing that explores those really awkward questions like “What’s Korea” or “Are you from the ‘good’ Korea?” There’s this facade where people say something or act something out where you don’t realize how bad it is until you’re a lot older. And that’s where the pain comes in because you can’t go back to the past to tell somebody ‘Hey, that thing you did wasn’t super cool, I just want to let you know. So, that’s the sort of feeling, this psychological, emotional mood, that I like to put into my art. That’s how the Asian American identity comes in.

What role does art play in your life? How has it changed over time?

It’s always been something I’ve tried to suppress. There’s this stigma of “You’re definitely not going to make any money.” That’s definitely true that illustrators are heavily underpaid. I told myself for a while, I could do something else, but while there were things I could have done, I don’t think that’s what I wanted to do.

Being an artist or illustrator has become much more prominent into my identity, especially in the past couple years when I decided to make illustration my career. But I don’t want to say illustration is completely who I am. I try to not talk about illustration as much when I’m with friends or coworkers. There’s something else about me that’s not just an artist. There’s a lot of stuff. I like to be phsically active, I like making stupid jokes… things like that.

Can you tell us about your upcoming graphic novel and memoir “In Limbo?”

Can you tell me about the process behind making your most recent comic, “Dear Child Protection Service”?

It started when I was working on “In Limbo,” and I realized I was getting into a really bad place and getting deeper and deeper into it. The comic apparently was a lot more relatable than I thought it would be.

It’s such a personal topic. I have this recurring joke with my boyfriend that when I’m sad about something, I’ll make a comic about it. I started it on a Thursday or Friday and I finished it a few days later. [Talking about my parents] was the most uncomfortable part of the entire process.

What’s really important to note is that even though I think this was personally not a very nice way to discipline kids, it’s what they knew and how they were taught. When something happens and you think “I’m never going to do that to my kids,” but what if they said the same exact thing? So, they’re not completely bad people. That was the hardest part of the entire thing.

Along that line, because your art deals with a lot of personal trauma and emotion, how do you take care of yourself emotionally?

Honestly, writing and illustrating has been helpful a ton. I recently started going back to therapy. I started understanding more about why I am the way I am and finding peace with it. Talking about trauma and healing publicly has always been a healing process because now it’s something that I don’t have to keep a secret. For me, that’s a good way to heal. Maybe not for other people, but it’s definitely helped me.

What sparks joy in your life?

Okay, I think the best answer for this is cleaning up my room. Clutter gives me a lot of stress and I find that the deeper I clean (which unfortunately is quite rare), the lighter I feel by the end of it. Like normally I get scared of going into corners because of bugs, but after cleaning up everything with a lint roller and some clorox, I am less afraid of my space.

Who is your favorite Asian character from film or television?

Diane Nguyen from “BoJack Horseman” because I really like how she has a lot of faults. She has a lot of downfalls, she sometimes has self-destructive habits and that’s kind of how I also see myself. I know that I can try as hard as I can. I can’t be 100% perfect, but I try my best. It’s inevitable, but it’s also up to me to recognize it and acknowledge it. 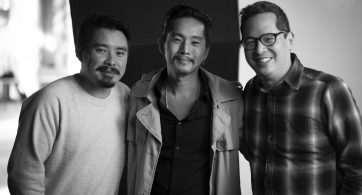 After reading his non-fiction work on racial injustice in America, one might imagine author Jeff Chang to have a voice like Christian Bale’s Batman in “The Dark Knight.” In […]