After reading his non-fiction work on racial injustice in America, one might imagine author Jeff Chang to have a voice like Christian Bale’s Batman in “The Dark Knight.” In reality he’s a little more like the bespectacled Clark Kent, genial and friendly even when discussing difficult topics like immigration tensions and fractious political campaigns. Calling from the Albuquerque airport, with announcements blaring in the background, Chang talks about what viewers can expect from the forthcoming digital series “We Gon’ Be Alright.”

“It’s given us an opportunity to revisit some of the most important themes of the book, but updated to more current issues,” Chang says of his latest work, which shares a title with his most recent essay collection (lifted from the lyrics of the Kendrick Lamar song “Alright”). “The book itself came out in September 2016, before the election. So much has happened since then.”

Bao Nguyen (who directed the 2015 documentary about “Saturday Night Live” titled “Live from New York!”) worked with Chang to create “We Gon’ Be Alright,” a four-part series that features conversations with creative pioneers like actress Kiều Chinh and dancer and rapper Isaiah Phillips. The series premieres on May 14 on Indie Lens Storycast, PBS Independent Lens, and will be available to stream on Chang’s website.

Nguyen, whose background is in cinematography and photography, found quite the challenge in making the digital series. “I’d never done an adaptation before working on ‘We Gon’ Be Alright,’” Nguyen says on the phone from Los Angeles. “I definitely felt a sense of pressure because I loved the book and wanted to adapt it well.” Many of his previous films also focus on activism, but because Chang’s essays can be so densely informational, Nguyen says he struggled to convey everything that’s packed onto the pages of the book. “It wasn’t originally written to be visual, of course, so turning that into something you can see was pretty difficult.”

Watching the polished final product of Chang and Nguyen’s labor, it’s hard to imagine that struggle. Within a short time frame (each episode is less than 10 minutes long), the series manages to cover an impressive scope of issues, like Hollywood’s casting problems, gentrification in Chang’s native Bay Area and the Harvard admissions scandal (a case filed by Asian American students who argued that the Ivy League college utilized discriminatory practices in their admission process). The latter is especially relevant to Chang, who campaigned for affirmative action at UC Berkeley during the 1980s. “We explore this deep history of discrimination against Asian Americans around admissions to colleges and universities, and we do that from the point of view of 18-year-olds who are all going off to college this year,” Chang says.

Artists and their art are crucial to the series. Nguyen describes filmmaking itself as a marriage between “art and activism,” and with the 2020 election around the corner, Chang and Nguyen both think art can provide a means to mend rifts and bring people together. “That’s the importance of the arts in this particular moment—to think beyond the fear and polarization of the moment, toward what it means for us to be able to live in community with each other,” Chang says.

Though many of the topics can be heavy, the series is not all “doom and gloom,” in large part due to Nguyen’s influence. Nguyen, who worked on the 2008 Obama presidential campaign before moving to a career in filmmaking, believes that the series will help people find more positivity as we move toward a future that looks increasingly divided. “Ironically, there wasn’t much hope in terms of the stories being told in our culture during the 2008 campaign. People looked for hope in our politics, and today it’s reversed,” Nguyen says. “Today, we see more people looking toward culture as a means of inspiring hope, and I think that’s the meaning behind both Chang’s essays and the series: we are gonna be alright.”

Chang and Nguyen might not be superheroes, but it does take a superhuman effort to create a successful series about the time period we live in. 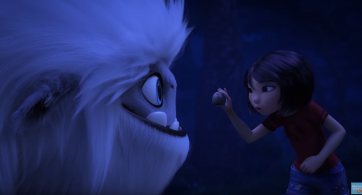 It might be warming up in Southern California, but come September we’ll be watching an adventure taking place on the chilly slopes of the Himalayas. The first trailer for […]